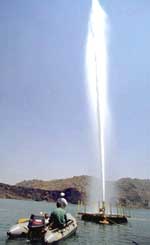 Lake Nyos in western Cameroon is waiting to spill carbon dioxide that would choke entire communities along its shores. A similar disaster asphyxiated hundreds of cattle and killed over 1,700 people in 1986.

Scientists explain that gas bubbling up from the Earth's magma is under tremendous pressure at the bottom of the lake; it remains dissolved until it reaches a saturation point and then, even a slight disturbance might release the dissolved gas as a devastating bubble. In 2001, a pipe was installed to suck carbon dioxide from the lake bottom and release it harmlessly into the air. There has been around 12 to 14 per cent reduction in gas content and the single pipes are not sufficient to rapidly remove them. Scientist warn of a bigger gas burst and recommend immediate installation of another four pipes at a rate of one each year.