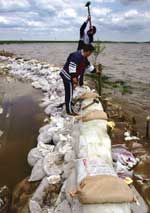 After weeks of flood since the Danube river broke its embankments in April, there are threats of a disease epidemic in the flood-ridden areas.

The water level in Europe's second-longest river rose to a 111-year record high when heavy rain and melting snow made the waterways swell and inundated vast tracts of land in Romania, Bulgaria, Serbia and Hungary making thousands of people homeless.

"We are concerned about the poor sanitary conditions and the possible spread of disease, both for people in makeshift camps and the ones still living in villages where latrines, wells and water networks are flooded out," said Anja Toivola, European head of the International Federation of Red Cross and Red Crescent Societies.