Thanks to 'rapid evolution' every life form may survive any amount of pressure from its external environment, a study proposes 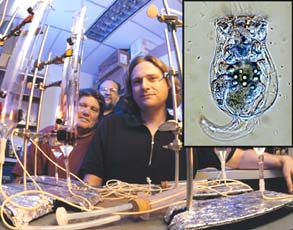 Thanks to 'rapid evolution' every life form may survive any amount of pressure from its external environment, a study proposes. To date, evolution was considered as a slow process -- as proposed by Charles Darwin. The study, by researchers from the us -based Cornell University, suggests that evolution cannot only encompass episodes like humans losing tails over hundreds of years. The process can be much more rapid -- genetic mutation (for adaptation) is an essential part of evolution. While mutation is random, it being passed over to the 'next generation' is reason enough for evolutionists to ponder over it.

The research, published in Nature, is the first-ever scientific proof of how viral or bacterial pathogens mutate (read: evolve) with speed to become resistant to drugs. The findings complicate the work of researchers struggling to find vaccines for viral diseases such as the acquired immuno deficiency syndrome (aids) and influenza. Believing evolution to be a slow process, researchers generally do not keep 'genetic mutation and its transfer to the future generations' in mind while experimenting and analysing data to develop new drugs.

To prove their concept of 'rapid evolution', the researchers scrutinised the relationship between a predator and prey. It is conventionally understood that an increase in the number of predators naturally decreases the number of prey; and with no food (prey) available, the predator population eventually crashes. When the prey population has recovered sufficiently, the cycle begins anew. However, when the researchers carried out experiments on a prey-predator system, they observed otherwise. They used Chlorella vulgaris -- a species of algae -- as the prey, and Brachionus calyciorus -- multi-cellular rotifers -- as the predators. The lifecycle of both the organisms was found to be too long to be explained by conventional predator-prey dynamics. Mysteriously, there were 'extended periods' when the prey population was very low, but predator population remained maximum. Similarly, there were phases when the prey population was very high but the predator population refused to show any increase.

According to the researchers, one of the following factors could be responsible for the 'unusual' happening -- nutrient availability for algae, self-destruction of the rotifer through the production of toxins, decreased viability of rotifer eggs in response to shortage of food or rapid evolution of the algae. To zero down on one of the factors, the researchers once again carried out a series of tests. Instead of experimenting randomly with a variety of Chlorella vulgaris, the researchers used clones of specific parental lines of the algae. When the clones from just one parent C vulgaris were fed to the predator, the prey-predator cycle was the same as is predicted classically. But, when clones of multiple parental lines were used (similar to natural ecosystems), the prey-predator cycle was long.

"It makes intuitive sense that the impetus for evolution is strong on the prey -- if you want to avoid becoming someone's dinner, you must evolve to become too fast to catch or too poisonous to eat," says Laura Ellen Jones, a co-author of the study. But is the phenomenon true for the real world of humans and their pathogens? "The researchers modelled a simple laboratory system that facilitated their study, but the principles can apply to any population," says Ilkka Hanski of the department of ecology and systematics, University of Helsinki, Finland.