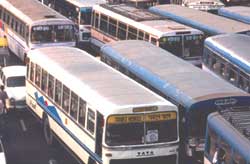 familiar scenes were witnessed in the recent courtroom drama on Delhi's polluting transport fleet, with key roles being enacted by the usual dramatis personae . But it ended on a different note. In a fitting finale, the Supreme Court (sc) brought the curtain down on the capital's diesel buses. It also came down heavily on polluters, asking them to pay for dawdling over conversion of their vehicles to cng (compressed natural gas).

The apex court's verdict is a sharp departure from its earlier approach of setting a deadline for the government and expecting it to comply with the order. Emphasis was laid this time on making public health the core issue through the application of the 'precautionary principle' and by getting into the 'polluter pays' mode. Another marked difference was other polluted cities such as Lucknow, Pune and Jodhpur finding mention in the verdict, with the sc suggesting that they, too, switch over to cng for running their public transport.

The landmark ruling came on April 5, 2002, after an exhaustive deliberation with the parties concerned. According to the order, all public transport vehicles will run on cng. In a pre-emptive measure, the Union and state governments have been debarred from appealing for any further extension of deadline for the switchover. The court has chalked out a clear-cut strategy wherein 800 diesel buses will be phased out every month in the city from May 2002 onwards against a corresponding installed production capacity of 1100 cng buses.

In addition to this, the sc has imposed a stiff penalty on diesel bus operators who, in defiance of the court's earlier order, have continued to run their vehicles on the polluting fuel. A fine of Rs 500 per bus per day is being charged from April 6, 2002. This will be hiked to Rs 1000 from May 6 until there is a complete shift to cng. By slapping a penalty of Rs 20,000 on the Union government for repeatedly seeking modification of the order, the court seeks to send out a strong message.

Meanwhile, Delhi is reliving the aftermath of earlier court directives on cng: chaos on the roads due to an acute shortage of buses; the usual set of diesel bus operators lobbying with the same band of politicians to buy more time; the central and state dispensations busy passing the buck to each other; and, amid the snafu, air pollution snuffing out one life every hour.

In a significant observation, the court stated that the auto policy must focus on measures to "...anticipate, prevent and attack...." Such a proactive strategy needs to be employed post-haste. Because in the past one year, Delhi has been losing whatever it had gained in terms of air quality after four years of court-driven anti-pollution measures. "Lack of concern or effort on the part of various governmental agencies has resulted in spiralling pollution levels," the court noted.

While reinforcing its belief in cng as a clean fuel and rejecting the Mashelkar committee's multi-fuel concept, including diesel (see box: Report comes under fire ), the court said: "It will be open to the Union of India to supply lpg (liquefied petroleum gas) in addition to cng" as an alternative fuel, "or to supply any other clean, non-adulterable fuel" as recommended "by the Bhure Lal committee".

A protracted legal battle has spawned the current verdict (the origin of the case can be traced back to 1985). The campaign against vehicular pollution, however, gained momentum only in 1998, when the court formed the technical advisory committee (Bhure Lal committee) to advise it on the technical aspects of the issue.

On the contentious matter of supply of cng, the Union government has been told to give preference to the transport sector. "If there is a short supply of an essential commodity, then priority must be of public health, as opposed to the health of the balance sheet of a private company," the court ruled. In fact, the supply of the green gas has been the main bone of contention between the Centre and the Delhi government. The latter has alleged that the Union petroleum ministry is not supplying enough gas for the city's fleet of cng-run vehicles.

The authorities are, meanwhile, in a fix as the court has made its order immune to any administrative attempt to nullify or modify it. Earlier, the government had managed to get three deadline extensions by citing inconvenience to the public. On their part, transporters are demanding implementation of the Mashelkar panel report, which would give a new lease of life to diesel buses. Currently, two ex-chief ministers ( cms) of Delhi are urging the Union government to issue an ordinance to circumvent the sc's directive. "For the people of Delhi, we can go to any extent," says former cm Madan Lal Khurana. Realpolitik in overdrive?