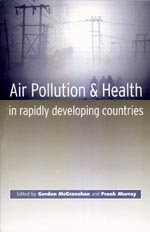 Do we need yet another book on the health impacts of air pollution when every year more and more studies are published in scientific journals all over the world recording health impacts? Though considerable knowledge has been gained in recent years about the impact of air pollution on health, much of this is not easily accessible. In the preface to Air Pollution & Health in Rapidly Developing Countries, Roger Kasperson, executive director of the Stockholm Environment Institute (sei) claims that "This book aims to make some of this knowledge accessible to a wider audience". And that is indeed its strong point.

It is a cogent compilation of crucial information by internationally renowned experts. The Indian experience shows that when urged to take mitigation measures, the government or industry begin to take evasive action. Confusion and misinformation then take over in the attempt to translate the knowledge into action. Therefore, the book, whose "aim...is to synthesize policy-relevant knowledge on air pollution and health, and thereby provide a firmer basis for improving public health in low and middle income countries," comes as a good reference item.
The book, part of the programme on Regional Air Pollution In Developing Countries (rapidc), has 11 chapters covering a range of issues in the study of air pollution and public health. While the introduction sets the context of the discussion, the first chapter explains the scale of the threat air pollution poses to the individual, the household, the community right through to regional and global levels. The second and third chapters highlight the epidemiological studies produced in the developed and the developing countries. Certain important tools of air pollution management such as air pollution guidelines and standards and rapid risk assessment are discussed in chapters four to six. Chapters seven and eight address the issues of indoor air pollution and health impacts of vehicular pollution in developing countries, respectively. The last three chapters present case studies from Hong Kong, Santiago and Greater Johannesburg.

A good ambient air quality monitoring network is, for sure, a pre-requisite but it is certainly not the be-all. It is also important to assess personal exposures. As is pointed out in the book: "Although the idea of looking not only at where the pollution is but also at where the people are to determine the total health implications of pollution may seem obvious, it can have a profound impact on how the problem is framed. In this way, for example, vehicle emissions, which are released in places and times where people are located, may exert a higher health price per unit of pollution than emissions from large outdoor sources, such as power plants, which release pollutants relatively far from where people reside."

An argument repeated ad nauseam in defence of the inaction of the industry and the government is that there is not enough evidence of health impacts of air pollution in India. Recent studies of different Indian cities have started filling this gap. But should the wheel be re-invented?

In this respect, epidemiologists Isabelle Romieu and Mauricio Hernandez-Avila summarise the findings very succintly. According to them, "Most available evidence suggests that populations living in cities with high levels of air pollution in developing countries experience similar or greater adverse effects of air pollution". They also point out that "Differences in relation to the level of exposure and co-exposure to different pollutant mixtures, the population structure, the nutritional status and the lifestyle observed in developing nations suggest that the adverse effects of air pollution may be even greater than those observed in developed nations."

The precautionary principle plays a critical role in air pollution management. It is well accepted that absence of evidence is not evidence of absence. Yasmin von Schirnding of who sets out the options of rapid assessment of air pollution and health for policymakers to frame policy despite inadequacy of information. To complement the rapid assessment, the book also discusses in detail the systematic approach to air quality management, citing the urbair project, which developed action plans in four large cities in Asia -- Jakarta, Kathmandu, Manila and Mumbai.

The book is definitely an excellent reference handbook for policymakers, researchers and changemakers.