An adulterated cooking medium sparks off panic in India, but the government remains clueless on how to deal with the crisis 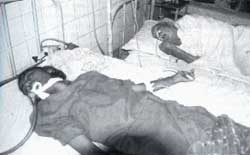 THE ZING went out of Indian cooking and a nationwide panic gripped the country as mustard oil, the country's most favoured cooking medium, had to be banned and all stocks seized by the government. Among these were also stocks belonging to the prestigious National Dairy Development Board. The mustard oil was found to be adulterated with oil from the seeds of a prickly poppy plant, Argemone mexicana. This led to a spate of dropsy deaths- 52 in Delhi alone. The government responded with raids and seizures, but it is still not clear how the contaminated oil is to be disposed of.

There is a strong suggestion in the Union government that the entire unsold stock be converted into lubricants, if an environmental disaster is not to succeed the health disaster from which the nation is yet to recover.

The first act of the tragedy was serious enough for the Centre to order a Central Bureau of Investigation probe into a suspected security-related sabotage. The final act would depend on how the government chooses to dispose of the oil seized from outlets in 12 states. If done the wrong way, a catastrophe would be the likeliest result.

The initial apprehension was the government would let the contaminated stocks be discharged into the Yamuna, and the various city drains and water courses. "Gutters" was the first reaction of Harsh Vardhan, Delhi's health minister. But this was hastily withdrawn, as serious thought began to be given to the crisis in the appropriate departments of government food, health and the Central Pollution Control Board (CPCB). A meeting of health secretaries of all states was also called by the Centre to deal with dropsy cases as they began to be reported from many parts of the country, particularly the heavily mustard oil-consuming eastern India.

The front-runner among suggestions at this stage is that the contaminated mustard oil stocks should be converted into lubricants. Food ministry sources suggest that a meeting of officials on September 4 approved this course of action. They were advised by the CPCB. However, the government is yet to make a public announcement on this. This may be because the repercussion on the lubricants market has not been gauged yet, and commercially unfriendly suggestions could lead to another kind of a spin.

While precise figures are not available, quite clearly thousands of tonnes of mustard oil stocks throughout India have to be junked. Releasing them into rivers, streams and city gutters would easily have triggered a chain of environmental problems given the huge quantity of oil to be destroyed. Ravi Agarwal, secretary of Delhi-based NGO Sristhi says, "Dumping the oil into Yamuna would have affected the river ecology. As the oil cover on the river blocks oxygen, the flora and fauna in the river would have been affected grievously." The CPCB also opposed this move. Says D K Biswas, the chairperson of CPCB, "It would have been a major disaster given the quantity of oil to be dumped."

A suggestion considered seriously at one stage was to burn the entire stock. This too was opposed by the CPCB. "Burning hundreds of tonnes of oil will create a situation similar to haze from forest fire. It will have severe environmental impact," a CPCB scientist noted.

While converting adulterated mustard oil into lubricants might save humans, it is not clear so far if there is likely to be any impact on cattle, given the process used to mix mustard seeds with Agrernone (a prickly poppy plant) seeds before these were pressed into oil. The livestock could suffer from dropsy as mustard cake with Agremone residue may have been used as cattle feed in many parts of the country.

S K Khanna, head of the food toxicology department, Indian Toxicology Research Centre, Lucknow, says: "Agremone has a very high oil content. But if the toxic content is removed from the mustard oil it can be used for industrial purposes. But it has not been done because of the high cost factor."

Nonplussed and unsure of itself, the government has ordered that hence-forth all edible oil will only be retailed in proper packs.

With inputs from Archana Srivastava, Lucknow