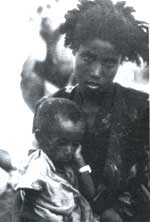 IMMUNOLOGISTS believe that because of the low levels of hormone called leptin, millions of malnourished people in the developing world become victims of infectious disease. Their study, if proved correct, may save lives of the starving millions. "There are 180 million malnourished children in the world. That's three times the child population of the us, and so, any development that could strengthen their immune systems would be tremendous," said Lawrence Haddad of the International Food Policy Research Institute in Washington, DC.

It is well-known that starvation weakens immunity. The study can explain why diseases such as measles and pneumonia kill so many children in developing countries. It is believed that lack of minerals and vitamins in diets is partly responsible. But exactly why starvation makes people susceptible to infectious diseases is unclear.

Graham Lord and his colleagues at the Imperial College's School of Medicine in London believe they have found a large part of answer in 'hormone leptin', a medicine which regulates appetite. Already low levels of leptin has been found in people who are starved, and mice. In order to find out more about the effects of low leptin levels, the team incubated human CD4 cells which orchestrate the body's immune response, with other cells that can provoke an immune response in which the cn4 cells multiply. According to the team, adding leptine in various concentrates had a striking effect. The more concentrated the leptin, the higher the number of cu4 cells. The results were then tested in controlled experiments with mice, where 24 mice were made to starve for 28 hours.

The result was lowered leptin levels leading to 69 per cent reduction in the animals' immune response to chemical oxazolone, which causes inflammation. However, two injections of leptin per day during starvation prevented the immunity suppression.

If leptin is given to malnourished children with the vaccine, immunisation may become effective, says Lord. "It seems that by keeping leptin levels up, we are telling the body to keep immune function up," he says. Lord is also quick to warn: "But below a certain level, leptin switches of or diverts energy expenditure from non-vital functions, including the immune system, to the brain and the heart."

Doug Fearon of Cambridge University says that the results are surprising from the evolutionary perspective. He doubts that immune system uses much energy, even when fighting a new infection. He adds that giving up energy to organs such as the heart would seem counter-productive. Fearon admits that what the team has observed is quite interesting.

Lord says that other people with depressed immunity, such as those carrying the HIV, also have low leptin levels, and may also benefit from the new findings.