Death of a computer 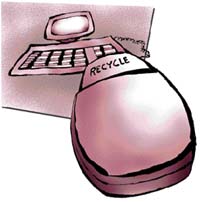 the us is facing a population explosion of a strange sort. The land of the birth of computers, is today choked with piles of its glorious invention. With no easy disposal method identified as yet, the mountain of obsolete personal computers ( pc s) is increasing everyday.

As the life span of a computer gets shorter, the pile of pc s cast aside for speedier models grows even larger. The rejected old machines inadvertently find their way into landfills, thereby posing a major environmental problem. Old computers can be environmentally hazardous if they are not properly recycled. A pc' s central processing unit contains traces of toxic metals such as mercury and chromium. Monitors contain lead, which is mixed with the glass of the screen to shield users from radiation. All these elements have the potential of polluting the surrounding areas.

"We should find a practical way of handling old computers other than digging a big hole and dumping them in the ground," says Reid Lifset of Yale University in the us and editor of the Journal of Industrial Ecology . "Indeed what is imminently required is a wide-ranging computer-recycling programme," he says.

In a report issued in June, the National Security Council of America estimated that only 11 per cent of the pc processors that became obsolete in 1998 were recycled. Another three per cent were resold or donated to someone else. No one knows whether the remaining machines were thrown into landfills. The report predicts that in 2002, nearly three and a half million more pc s will outlive their usefulness. In the absence of proper alternatives for disposing of outdated computers, people like Josh Sobeck, a resident of San Francisco, are at their wits end. Sobeck has relegated two unused Apple machines to his pantry, he does not know what else to do with them. "I have discovered that they are excellent at collecting dust and holding up bags of rice, but other than that, I am at a loss," he says.

Apparently, Sobeck is not alone. A study undertaken by students of Tufts University at Medford, Massachusetts revealed that almost 76 per cent of the old pc s in the us are lying in disuse. These are staggering figures that call out for immediate steps towards viable solutions. Though a few cities have tried computer-recycling programmes but these have largely been stray cases. One such case was in San Jose, California, where a one-month pilot programme in 1997 netted 972 central processing units ( cpu s), 937 monitors and 413 printers among computer equipment collected at three electronic stores.

But unfortunately, not many have followed the San Jose example. The business of computer recycling is still largely an untouchable proposition. The reason: it is hard to make a profit overhauling outdated pc s, or breaking them down for scrap. Older, commercial computers are still okay for they contain enough gold and silver to make them valuable to recycling firms. But newer, individual models do not have any of these precious metals, says Greg Pitts, director of environmental programmes for the us -based Microelectronic and Computer technology Corp. What they have, instead, is a lot of plastic.

Some companies, however, do manage to make profits. But they generally get their pc s from manufacturers and large business firms, which ensure a high volume of consistent supply.
One solution may perhaps be more leasing of computers, so pc manufacturers would have a bigger incentive to reuse parts, and better systems for transporting old computers, to bring down recycling costs. Another way to prevent pc s from becoming obsolete is to upgrade them. Upgrading involves a change of the cpu in terms of the ram or the memory being increased according to the latest level. For certain cpu s, a change of motherboard may also be required. For example, in order to upgrade a pc from Pentium II 350 to the latest in the market, the Pentium III, a change of motherboard may be required.

To tackle this problem Intel is now coming out with cpu s containing Socket 370 or Slot (board manufacturers around the world have begun designing boards with both the options). These new additions will make the pc s upgradable for a long time to come, thus making the machines less susceptible to the 'obsolete' status
Like every where else in the world, the market in India for pc s is increasing rapidly. This means the problem of obsolete pc s will soon be raising its head in the country as well. Last year, over one and a half lakh pc s were sold for home use purposes and over five lakh for commercial use.

Talking about the Indian scenario ibm New Delhi's, Anupam Adeeb recalls having attended a conference where a speaker raised the query as to how many of them were unsatisfied with their present systems. Surprisingly, most of the panel raised their hands. "That is because the average life span of a new model has become only six months. By the time a person adjusts himself to a machine, a newer, faster system has reached the market," he says.

According to him "the obsolete systems in the commercial sector are basically put to three uses. Some companies negotiate buybacks, while others transfer them as 'intelligent terminals' (as compared to a 'dumb terminal' that has to rely on the server to do computing. In case of intelligent terminals, the pc side too can handle computing). There have even been cases of companies giving away their obsolete systems to their employees."

"Sometimes", says Yogesh Mehta of the Delhi-based computer company, Indo Con, "we also hear of private companies selling off their outdated systems to government organisations. At most of these government organisations there is really no need for the latest fast models; they can very well do with the low power cpu s because the kind of work they handle with the help of the computers is basically clerical."

Talking about individual owners, Adeeb feels that "the problem really does not exist at the home-user level, that is because most people do not usually discard their pc s. They go for cpu exchanges at times. This means that in this strata the 'obsolete pc s' hardly have a presence."

Elaborating on the same Rajiv Mullick, a correspondent for the magazine, Computer World , says, "Usually at the household level the upgradation is not a trend because it is way too expensive. Normally pc s at home are generally used for minimal functions like word processing, printing and at the most for Internet and e-mail. For these purposes, one does not need to change to new, faster models. So in case of house hold use the system does not become obsolete for a very, very long time."

N K Rao, a resident of Greater Kailash in Delhi, had two unused systems a month ago when his children left for studies abroad. But unlike Sobeck, who had to look towards his pantry to get rid of the unwanted systems, Rao simply sold off one of the pc s, and shifted the other to his office, where there is always a need for more systems. Thus, at the end of the day, one does feel that unlike the us , the disposal of obsolete systems is really not a big problem in India. Hardly any pc s are abandoned. At the most basic level, says Mehta, "One can simply sell off an outdated system at a lower price." There is always a buyer for any model of computers in India as there is still ample place in the market to absorb outdated systems.

"Though the pc market is growing rapidly, it cannot in any way be compared to the one in the us, " says Vinnie Mehta, president of the Manufacturers Association for Information Technology ( mait ). "The ratio of pc s per person in the us is one for every two people, whereas in India, it is as low as three per 1000. So I do not see a us -like situation occuring in India for a very long time to come," Mehta said. He feels that it is far too early to focus on that front.

On what the industry is doing to handle the crisis when it does hit our shores, Mehta says "no steps are being taken to develop a computer recycling programme". This could pose a huge problem when a large number of systems not y2k compliant are rejected at the end of the year.

"The general attitude of the industry to this problem, as it is perhaps towards any other, is lackadaisical. We'll take action when it happens," he concludes, echoing the sentiments of the industry as a whole.