Deception, thy name is... 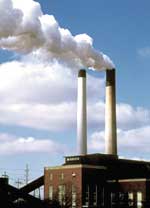 usa's George Bush-administration has once again proved that (its) appearances are deceptive. It recently claimed that combating air pollution will be its top priority and it will begin 2005 with "an aggressive push" in the us Congress to build support for its plan. But the lofty pronouncement has a rider, and that is the catch. The government will delay till March 2005 an interstate rule to cut pollution from power plants on the ground that some of its objectives overlap with the 'larger' plan.

Environmentalists are not upbeat about the interstate rule but they oppose the proposed legislation even more. While the former includes measures similar to the Clear Skies proposal, which was earlier opposed by the democrats and moderate Republicans, the latter also weakens the Clean Air Act, they say. Under the proposed plan, in January 2005, the administration will table a legislative proposal. The us Environmental Protection Agency administrator Mike Leavitt claims: "The centrepiece will be 'Clear Skies' legislation and/or the 'Clean Air Interstate Rule'. Both will provide a 70 per cent reduction of nitrogen oxides and of sulphur dioxide. It would be a us $50 billion investment in clean air.