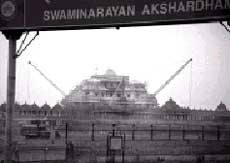 on january 12, 2004, the Supreme Court (sc) termed the construction of the Rs 200 crore Akshardham temple on the banks of river Yamuna in Delhi as "lawful". In doing so, it dismissed the Public Interest Litigation (pil) filed by the Uttar Pradesh State Employees Confederation (upsec). The sc ruled that all land use plans were adhered to and clearance of expert bodies obtained in the temple's construction.

But R K Singh, commissioner, Land Disposal, said in his counter affidavit on behalf of dda on November 18, 2004: "The allotment of the land has been made after a study and recommendation by National Environment Engineering Institute and approval of development scheme for the area from the competent authority, the Yamuna Committee of Central Water Commission." However, in August 2004, neeri's director Sukumar Devotta had told Down To Earth that neeri had never given a clearance to the temple. It had submitted a draft environment management plan for rejuvenation of the Yamuna River, in which the word Akshardham was not even mentioned (see Down To Earth, 'Master Violators', September 15, 2004, p 38).

Following the recent judgement, upsec counsel Vishwajit Singh said: "The court felt that dda, before sanctioning the land to the temple trust, had followed all procedures and taken the consent of neeri. It rejected our request to record the statement of neeri's director." The temple will be opened for the public in March 2005.