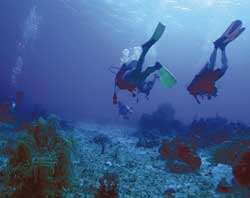 Based on the data and experimental finding from various studies, the report says that oceans absorbed about 118 billion tonnes of carbon between 1800 and 1994. This is turning the oceans acidic (or, reducing their alkalinity). The increased acidity lowers the concentration of carbonate ions, a building block of calcium carbonate that is essential for coral reefs and for the shells and skeletons of several marine organisms.

The report claims that for almost 650,000 years prior to the industrial revolution, atmospheric carbon dioxide concentration remained between 180 and 300 parts per million (ppm). But then it started increasing. The current concentration is about 380 ppm and is expected to continue to rise by about one per cent per year over the next few decades. "This is leading to the most dramatic changes in marine chemistry in at least the past 650,000 years," says Richard Feely, one of the authors of the report and an oceanographer at the us National Oceanic and Atmospheric Administration.

The report claims that coral calcification consistently decreases as the oceans become more acidic. This means that these organisms will grow more slowly, or their skeletons will become less dense -- a process similar to osteoporosis in humans.

Many calcifying organisms -- including plankton such as pteropods (marine snails) -- are also affected by the chemical change. This, in turn, affects fish species such as salmon, mackerel, herring and cod, for whom pteropods is an important food. Besides, several other major ecosystems that are supported by calcifying organisms, including shellfish, may also be threatened, the report warns.