Life-forms have been found even inside the Earth's crust, a region previously thought to be barren 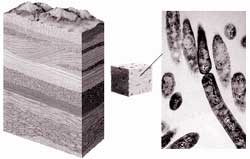 single-celled microorganisms -- bacteria, fungi and protozoa -- thrive on all parts of the Earth's surface. Their habitats range from boiling hot waters of thermal springs to pleasantly cool soils.

Long-standing scientific dogma, however, has held that the Earth's crust was essentially sterile. But this belief, as it turns out, is wrong. The first hints that microorganisms lived in the deep layers recently emerged from the studies of Edson S Bastin, a geologist at the University of Chicago, us. Bastin and his colleague Frank E Greer succeeded in culturing bacteria from groundwater samples extracted from an oil deposit that was hundreds of metres (m) below the surface. Microorganisms were even found beneath the Savannah river (Georgia, us), site, at depths extending as far as 500 m. This has led to speculations that these microbes might have been descendants of organisms buried more than 300 million years ago (Scientific American, Vol 275, No 4).

Microorganisms were seen to thrive well in igneous rocks as well; Karsten Pedersen of the University of Goteborg in Sweden detected bacteria in granite. Since igneous rocks are too hot to support life when first formed, the microbes found within such rocks must have been carried by the flow of groundwater sometime after the parent magma cooled and solidified. The bacterial communities thriving in such places include the so-called autotrophs, organisms that synthesise organic compounds from inorganic sources. The autotrophs use hydrogen gas for energy and derive oxygen from inorganic carbon dioxide.

Microbes found in the Earth's deeps depend on the capacity of the local environment to support growth. Crucial pre-requisites include the presence of water, space and nutrients such as carbon, nitrogen, phosphorus and other metals which microorganisms need to synthesise their cellular constituents. Therefore, it is seen that diverse bacterial communities thrive in sedimentary rocks, which commonly contain a rich supply of organic compounds to nourish microorganisms. These nutrients were originally produced by plants on the Earth's surface before the loose sands, silts or clays that constitute most sedimentary formations were buried and consolidated into solid rocks. As long as these nutrients are available, microorganisms living within the pores of the sediments will continue to survive and grow. Sedimentary rocks also supply oxidised forms of sulphur, iron and manganese that can provide the energy these microbes need. In some cases bacteria are able to survive deep within since the essential nutrients are gradually and constantly renewed from earth surface flora.

So far, David L Bulkwill of Florida State University, us, has catalogued and preserved more than 9,000 strains of microorganisms from diverse subsurface environments. An effort to probe the Earth's interior for microorganisms will surely reward the scientists with a further understanding of how life can exist in isolation from the surface. Moreover, study of subsurface communities may also indicate how life functioned on early Earth.