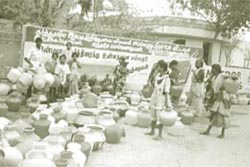 the department of atomic energy's ( dae 's) upcoming Koodankulam Atomic Power Project ( kapp ) at Koodankulam, 25 km north of Kanyakumari, Tamil Nadu, has run into a controversy. Local residents are complaining that not only will the project aggravate water scarcity in the area but also heightened their safety concerns.

The local people allege that the dae has failed to provide any logical explanation for selecting Koodankulam as the site for the project. In the area, water is a prized commodity and residents have to fight for their share of clean water almost every day.

dae officials say the proposed township for dae employees will be located 12 km away at Chettikulam. "Why," asks C Boomi, convenor of a group opposing the project. "Is the safety of their employees more important than ours," he says.

The project, according to a Nuclear Power Corporation ( npc) document, will draw water from the Pechiparai dam, which is 65 km away, to meet its requirements. But the possibility that water will be supplied from Pechiparai dam seems remote because Nagercoil town, which currently gets water from this dam, receives its supply only once in 10 days, says R S Lal Mohan, an environmentalist opposing the project.

The water scarcity is due to overextraction of groundwater. Rich farmers in the area have installed powerful pumps to extract this precious resource for water intensive crops and trees like coconut. This has resulted in a falling water table. Besides, the area receives very little rainfall. Worried about the depleting water resources, farmers have now begun pumping water to fill dry wells. Mohan says the plan should be scrapped before a dispute breaks out between the department and the local people over water usage.

At present, 500 pumps are operating in this area, says Ezhil Arasu, president of the panchayat . But at some places, the pumps do not work anymore because there is no water, he adds. The dae authorities on their part say there is water at a depth of 500 metres. Experts say that these are, in all probability, the fossil aquifers that can never be replenished and the project will suck up every drop of water. Furthermore, after acquiring the land, dae cut down all the trees in the area. "There were tamarind, neem and cashew trees earlier," says Boomi.

However, there are a few who support the project. "We were taken on a tour by the npc and we saw the villages near Madras Atomic Power Project in Kalpakkam. There were no problems there," says A Kumaraswamy, convenor of a committee supporting the project.