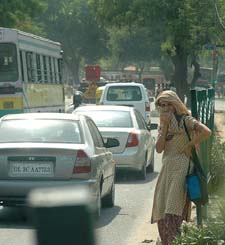 it's a turnaround of trends. Summers in Delhi are now more polluted than winters. Reason the nature of vehicular and domestic emissions has changed, leading to production of more oxides of nitrogen--the culprits that trigger heightened chemical reactions in the summer heat.

A new study by iit Delhi says nature of emissions has changed primarily due to imposition of control measures like implementation of cng norms and a significant shift to lpg use in households. The study was published in the Journal of Environmental Monitoring and Assessment (January 23, 2007).

"This is because oxides of nitrogen are the raw materials for photochemical reactions favoured by the summer heat," said Manju Mohan, a professor of atmospheric sciences at iit Delhi and one of the authors of the paper.

But scientists at the Central Pollution Control Board (cpcb) are raising doubts on whether cng and lpg are the real culprits. They say the source of origin of these oxides of nitrogen had not yet been studied. Without that, it would be unfair to put the blame on cng or lpg.

cpcb also says that winters may still be more harmful. "While aqi in summers might be worse, smaller particles of 2.5 micron diameter are found more in winters. These particles penetrate deep into the lungs and trigger the worst health problems," a cpcb scientist said.

While the paper attributes the change in nature of pollutants primarily to imposition of new control measures like cng use and a significant shift to lpg in households, it has not established that increase in oxides of nitrogen is due to these emissions.

To calculate aqi, levels of major air contaminants were measured. The concentration of worst contaminant was then compared to established standards. These readings were converted to a number on the aqi scale.

"The conversion of nitrogen monoxide to dioxide and the photochemical reactions are seen more in the tropics. Increased concentrations of oxides of nitrogen result in more respirable suspended particulate matter (rspm) in the form of ammonium nitrate," Mohan said.

Ammonium nitrate is formed by a reaction between ammonia from agricultural sources and nitrogen dioxide.

The study conducted in seven areas in Delhi showed that concentration of oxides of nitrogen had increased rapidly since 2001, while that of oxides of sulphur and suspended matter had not increased in the same proportion.

cpcb scientists contest this. These oxides may have a role to play in the difference in aqi, but whether they come from vehicles or industries is not known at the moment, they say.