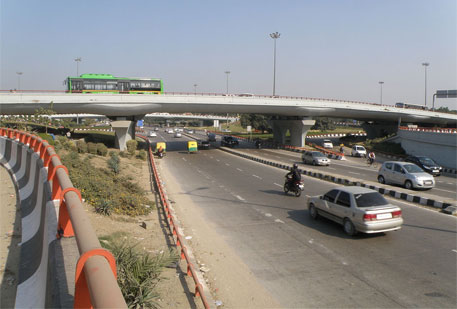 The Delhi Traffic Police identifies the city’s top accident prone zones as areas recording three or more fatal accidents or 10 or more total accidents within a 500-metre diameter. The review of these spots indicates:

• Killer roads: A majority of the accidents occur on signal-free arterial roads. Only eight roads, including the Ring Road, Outer Ring Road, GT Karnal Road, Rohtak Road, GT Road, NH-24, NH-8 and Mathura Road, account for about three-fourth of the total accidents in Delhi. Of the total accidents recorded on accident-prone roads, 33 per cent are fatal. Nearly 20 per cent of all accidents occur on the Ring Road; Outer Ring Road and GTK Road have 14 and 12 per cent, respectively.

Where do most accidents happen? The review of 128 accident-prone spots shows about 40 per cent happen close to flyovers and 30 per cent at unsafe crossings and junctions.

• Most accidents occur near flyovers, crossings and signal-free, high speed corridors:  Of the total hot spots identified near flyovers, about 27 per cent are on the Ring Road, 17 per cent on GTK Road, 13 on Outer Ring Road and 6 per cent on Mathura Road. It is important to note that the eight key arterial roads that record nearly 75 per cent of all deaths, have been designed as high speed corridors. These roads have received the maximum attention and resources from the government – including widening for six-eight lanes, flyovers to allow seamless travel for vehicles, subway crossings and foot overbridges to prevent people from crossing on the surface and obstructing traffic flow, and closing of medians to allow vehicles to move uninterrupted. These features have turned these arterial roads into death traps. Especially deadly are the places where the flyovers begin, where traffic merges in full speed. These include the flyovers at Dhaula Kuan, AIIMS, Sarita Vihar, Mahipalpur, Rajokri, Akshardham, Dabri, ITO/IP and Moti Bagh.

• Lutyens’ Delhi safest: Central Delhi—built around rotary, largely four-lane roads and with nearly no flyovers—shows the least number of accidents and virtually no accident hot spots. Its design has a calming effect. Even though the rotaries are of older design and have a scope for further improvement to reduce vehicle friction and safer passage for cyclists, this has proved to be more preventive than the high speed corridors.

• High number of accident hot spots near bus and Metro stations: It is very disturbing that the access paths to public transport nodes, including bus depots, bus stations, bus terminals and Metro stations show high incidence of accidents. Some of the notorious stretches are near ISBT gate, Anand Vihar ISBT, Pashchim Vihar Metro Station, Uttam Nagar Metro Station and Jahangirpuri bus standc. Ten bus stops are listed as accident spots – these account for 8 per cent of the total accidents, and include the Kashmere Gate and Wazirpur stops. Among the Metro stations, those at Mansarovar Park, Uttam Nagar and Madipur are the major accident spots. This is a serious matter in view of the fact that lack of safety in accessing public transport can compromise public transport usage.

• Most risky for pedestrians, cyclists: In 2013, 56 accident-prone zones for pedestrian victims were identified by the traffic police; 21 such hot spots have been identified for cyclist accidents. Areas near public transport nodes, major markets and low income areas indicate an increase in pedestrian accidents: in some locations, the numbers have increased by 1.3 to four times during 2012 and 2013. Some key accident spots especially vulnerable for pedestrians include Karkari More, Nigam Bodh Ghat, Britannia Chowk and Faiz Road Crossing; for cyclists, the stretches include Azadpur Subzi Mandi, Dharampura Red Light, Bhalswa Chowk and Deepali Chowk. According to the Street Design Guideline document, 40 per cent of the total road length of Delhi has “NO” sidewalks. Cycle lanes are almost negligible.

• More areas show increase in bicycle accidents in 2013 compared to 2012: Twelve accident-prone zones were identified by the traffic police for cyclist victims in 2012; in 2013, newer locations have come up. The zones especially vulnerable for cyclists include Azadpur Sabzi  Mandi, Shyamlal College, Nizamuddin Yamuna Bridge, Mahipalpur Flyover and Bhalsawa Chowk. This is a very serious concern as Delhi has the highest number of cyclists in the country and second largest number of walkers—in stretches like Uttam Nagar and Subhash Nagar on Shivaji Marg, and Jyoti Nagar East on Loni Road, cycles and cycle rickshaws outnumber cars.

• Notorious crossings: About 24 per cent of the total accidents happen at crossings/junctions. Accidents are happening on roads without properly designed junctions, or where provisions for crossings were missing. According to police data, 26 junctions are listed as accident hot spots. A CSE re-analysis of all accident spots and proximity showed that crossing and junction-related problems could be contributing to 30 per cent of the total accidents. Some key hot spots are Burari Chowk, Seelampur T-point and Ashram Chowk, which recorded 25, 25 and 22 accidents, respectively. Other hot spots are Faiz Road Crossing, Punjabi Bagh Chowk, Azadpur Chowk, Britannia Chowk, Okhla Estate round-about and Mukand Pur Chowk.

• Urban villages do not generate motorised traffic but suffer the most: Poor infrastructure near low income neighbourhoods increases modal conflict and friction considerably. Some of the notorious accident hot spots are near Ali Village and Shakarpur Chungi, with a total share of 10 per cent.

• Foot overbridges and subways, the adjunct of car-centric design, do not work: There is a growing tendency to remove people from the road while making signal-free corridors by building foot overbridges and subways for crossing. But as the traffic police’s own review of foot overbridges indicates, this has actually increased the safety risk as people still prefer to cross the road on grade. This forced eviction of people from the surface may help lower accident rates (as has been the case near the Anand Vihar bus station), but will also limit sustainable modes like walking, cycling and public transport usage. Such an approach is not the way forward.