Plans on to track pollution during the Commonwealth Games. What about cleaning the air?

One hundred and forty days before Delhi hosts the Commonwealth Games, Chief Minister Sheila Dikshit, on May 15, called a meeting to discuss ways to control air pollution in the city.

Officials from various state departments and activists were invited to the meet. Air pollution in the city is increasing despite controlling measures, Dikshit said, adding that her government is preparing contingency measures.

Cleaning the air is crucial because the city’s pollution levels could hit athletes in particular. Their breathing pattern is different, said Sunita Godara, Asian marathon champion. They usually breathe vigorously through their mouth while exercising and playing. Pollutants are carried deep into the lungs. Athletes take in 10-20 times more air than usual, and thus more pollutants. This affects their health and performance.

The pollutants to worry about include suspended particulate matter (PM) of less than 10 and 2.5 microns (PM10 and PM2.5), nitrogen oxides (NOx) and ozone. The timing of the games is also a concern. In a cool month like October, the calmer weather traps pollutants close to the ground level, said C K Varshney, retired professor of environmental sciences at the Jawaharlal Nehru University in Delhi. New Zealand has already advised its athletes to arrive in Delhi close to the date of their events and step out into the city only after the competition is over.

The Central Pollution Control Board (cpcb) and the Delhi Pollution Control Committee are setting up an additional six real-time air quality monitoring stations, including two mobile stations, in areas with high vehicular traffic. These stations would track all notified air pollutants and toxins during the Games. 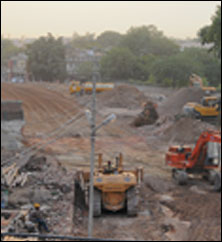 Delhi will also see the country’s first major initiative to predict air quality during the Games that provides information two days in advance. cpcb officials are working with two French firms, Aria Technologies SA and Leosphere SA, which had set up a similar system for the 2008 Beijing Olympics. The system uses Lidar (light detection and ranging) technology, which releases and captures a laser beam and measures the before-after difference to gauge the concentrations of various pollutants in the air. Sarath Guttikunda, consultant with cpcb on this project, said the system will assess pollutants entering Delhi from across the borders.

The Indian Institute of Tropical Meteorology (iitm), an autonomous body under the Union ministry of earth sciences, in Pune has already prepared a forecasting system for the Games. “The System of Air Quality Forecasting and Research, or safar, displays pollution levels, both real time and a day in advance,” said Gufran Beig, deputy director at iitm. The system will monitor 10 locations in and around the Games venues and village. For easy dissemination of information, air quality will be categorized in good, moderate, unhealthy for sensitive group and unhealthy, and displayed in green, yellow, orange and red colour codes through 40 wireless digital display panels across the city. safar is the first of its kind monitoring programme that will analyse causes of air pollution. Based on the information we will recommend the government how to curb the pollution, Beig said. The UN recently praised iitm scientists for the state-of-the-art system.

In collaboration with iitm, imd has drawn up elaborate plans for the Games, which include installing sophisticated equipment across the city and national capital region (ncr) to forecast weather every three hours, said Siddhartha Singh, meteorologist at imd. In case of thunderstorms, it will forecast every hour to help players and organizers plan better.

B Sengupta, former member secretary of cpcb, however, puts in a word of caution. “Although several agencies are involved in the monitoring and forecasting, there is no nodal body for coordinating the information,” he said. There should be a common protocol to suggest which pollutants to monitor and when, Sengupta said. Beig, though, is confident that all systems would be coordinated and care would be taken to avoid duplication of information.


Monitoring the air quality alone won’t help. This must guide the contingency strategies during the Games. At the time of winning the bid to host the Games in 2003, Delhi had already initiated a series of measures to clean its air. It relocated polluting industries, stalled further expansion of thermal power plants generation inside the capital, improved emissions standards for vehicles, removed old commercial vehicles off the road and public transport now runs on compressed natural gas.

But the clean air targets during the Games will need more immediate measures. The rapidly increasing personal vehicles remain the main challenge—more than 5.6 million vehicles ply on Delhi’s roads every day and another two million come to the metropolis from towns in the ncr in adjoining Haryana and Uttar Pradesh. 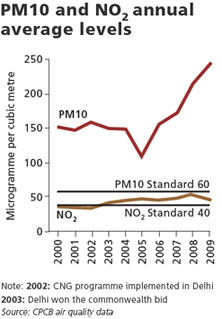 cpcb has prepared an advisory for abatement of air pollution during the Games, which has also been circulated to Haryana and Uttar Pradesh governments. The plan includes measures like regulating traffic, encouraging public transport, halting construction work and shutting thermal power plants. But it is silent on the time-frame for enforcing the action-plan.

Dharmendra said, “We have already closed the Indraprastha coal-fired power plant.” To fill the demand gap, two gas-fired power plants will start operating in Bawana and Bamnoli in a couple of months. The biggest concern, though, is increase in traffic. Although the government is aware of the problem the mechanisms to bring it under control has not been finalized, he added.

May be the government can take cue from Beijing, notorious for polluted air; the Chinese city improved its air quality just in time for the 2008 Olympics. In 2001, when Beijing won the bid to host the Olympics, China was heavily dependent on coal power and in the grip of exploding vehicles numbers. Only half the days in a year were considered blue sky days.

Over the next eight years, the authorities implemented 200 environmental measures, which cost US $17 billion. A quarter of this was spent to clean the air. But even after consistent and aggressive efforts, Beijing found it difficult to ensure clean air during the Olympics and needed a contingent plan: it actually pulled out 50 per cent of the vehicles daily during the Olympics.

Air pollution monitoring and control for public health benefits must last beyond the Games. Randeep Guleria, professor at the All India Institute of Medical Sciences in Delhi, said complaints of respiratory difficulties are on the rise and many people develop asthma-like symptoms after coming to Delhi. The Commonwealth Games, dubbed Green Games, is an opportunity to clean the air for better public health.