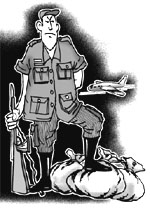 Zimbabwean soldiers are plundering the natural resources of the Democratic Republic of Congo ( drc ), alleges John Makumbe of a corruption watchdog group. Zimbabwe has deployed almost 11,000-12,000 troops in drc since August 1998 to support president Laurent Kabila's government against the rebels in the civil war.

"Others countries, including Rwanda and Uganda, which have sent their soldiers to support the drc government, are also exploiting Congo's resources. But Zimbabwean soldiers are the most greedy," says Makumbe. Both Rwanda and Uganda support rebel movements to topple the drc president Kabilai.

Since the civil war began in drc two years ago, Zimbabwe has established air and rail links with drc. O n the pretext of helping the poor country, v ast reserves of gold, diamonds and uranium of drc are being transported to Zimbabwe via train. In 1999 armies of both the countries created joint enterprises to mine gold and daimonds in drc .