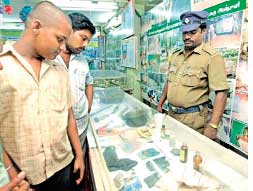 Robin Hood for some and murderer for others--the legend Veerappan is back in the limelight with an exhibition. The city police of Salem in Tamil Nadu have put up a Veerappan stall at the Government Exhibition-2008. There is a distinct self-congratulatory ring to the exhibition. The exhibits includes wrist watches, leather bags, medicines, syringe, comb, match box, a map of Karnataka, black hair dye, a camphor stand and the holy ash of Bannari Amman temple, used by the ivory poacher who was accused of killing over 2,000 elephants. Veerappan's signature tune was sending tape-recorded messages to the government; amongst the items on display is the cassio tape recorder that he used. Also on display are some clothes worn by him. These articles, claim the police, were collected after Veerapan was killed in an encounter in October, 2004.

This exhibition has definitely aroused curiosity about Veerappan's life in the forests and the October 2004 encounter. Drawing huge crowds from neighbouring towns and villages, it is expected to net Rs 30 lakh in Salem alone as the fair goes on till the end of September. The exhibition also has some disturbing pictures of over 120 of Veerappan's victims. The police are aware of the bandit's popularity. Hence the principle objective of this exhibition is to portray Veerappan, not as a hero but as a cold-blooded killer.

The brigand's wife Muthulakshmi refused to comment on the display, not even responding to allegations that some exhibits were manufactured.