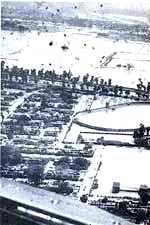 IT'S NOW almost taken for granted that if a flood occurs in the plains, then a forest must have disappeared in the mountains. However, this notion, which indicts the land-use practices of the mountain people, is fast losing its punch for lack of evidence. Two recent studies sponsored by the Tokyo-based United Nations University have further chipped away at this long-held theory (Mountain Research and Development, Vol 13, No 3).

The belief is that deforestation leads to soil erosion, which in turn accelerates and increases run-off and thereby augments the amount of water in a river. Conversely, during the dry season, the river volume would decrease. The first study, by Thomas Hofer of the University of Berne in Switzerland, examined whether rain and snow in the hills have altered the volume of water in rivers over the years.

If deforestation has a bearing on floods, a river's annual peak volume would increase over time and the difference between the river's high and low volumes would increase. However, statistics -- albeit inadequate -- tell a different story. In none of the rivers Hofer studied -- Jhelum, Chenab, Beas and Sutlej -- is this range widening. In fact, in the Beas, the gap is narrowing. Hofer also found that though the amount of water in the Chenab and the Sutlej has increased over the years, this trend is far more significant in the case of the Sutlej than for the Chenab. The swelling of the Sutlej can be attributed to increasing rainfall. However, the Chenab is a paradox because rainfall in its catchment has been decreasing. The Beas and the Jhelum show a barely discernible decrease in water flow and a similar decrease in rainfall.

Hofer admits that the characteristics of the Chenab cannot be explained on the basis of rainfall alone -- melting snow and the numerous glaciers in the upper reaches of the Chenab could also be influencing factors. Though he concedes that human activity in the hills could affect the hydrological characteristics of the river, he points out that the relationship between increasing water flow in the Chenab and decreasing rainfall is tenuous and not statistically significant.

The second study, also undertaken by Hofer, looked at floods in the Gangetic plains and found no evidence of a link between rainfall in the hills and the intensity or frequency of floods. On the contrary, the study suggests that flooding in the plains is affected not so much by rains in the hills as by rains in the plains. Though the hills experienced massive rains in 1954, 1958, 1959-1967 and 1978, West Bengal hardly had any floods. On the other hand, extraordinary floods always coincided with high monsoon rains on the plains in West Bengal, as in 1956, 1959, 1968, 1971 and 1978.

The findings of both studies, however, are marred a little by inadequacy of data. Says Hofer, "For India and its neighbouring countries, water policy is a controversial issue. Therefore, information on water is classified and extremely difficult to obtain." He admits that other interdisciplinary factors will have to be included in the investigation to understand better the relationship between the plains and mountain land-use and degradation.