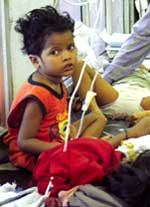 delhi is in the grips of a severe outbreak of dengue, which has claimed a number of lives.

Dengue cases started being reported in the capital since early September, but the issue came into focus when a student at the All India Institute of Medical Sciences died of the disease on September 30, 2006. The prime minister's family getting affected on October 4, 2006, further brought the issue into prominence.

According to figures released by the National Vector Borne Disease Control Programme (nvbdcp), as of October 6, 2006, Delhi led with 743 cases. A total of 11 states have reported 3,236 people being affected out of whom, 45 have succumbed to the disease.

An epidemic has not been declared and the Union health minister maintains that there is no reason to panic. He met health ministers from four states (Delhi, UP, Rajasthan and Haryana) on October 5, 2006, where he promised insecticides, fogging machines and blood test kits to the affected states. The issue of dengue was also raised in the cabinet meeting on October 5, 2006. 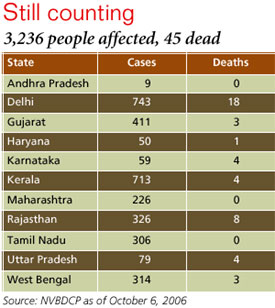 Though the present outbreak proves that preventive methods have not been enforced, the Union health minister gave the Municipal Corporation of Delhi and the New Delhi Municipal Corporation a clean chit saying that both civic bodies had done a commendable job to control the outbreak. The Delhi High Court has also issued notices to these organisations to report on the steps taken to prevent dengue.

Dengue is a viral disease manifested by a sudden onset of fever, severe headache, and muscle and joint pains. Symptoms include gastritis, abdominal pain, nausea, vomiting and diarrhoea. There is no commercially available vaccine at present, but a vaccine development programme called Paediatric Dengue Vaccine Initiative is in process. It is part of the International Vaccine Institute, an initiative of the undp with support of 38 countries and who.