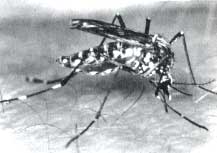 THE return of the dreaded dengue disease is leaving Delhi panic-stricken. Seven people have already died, and 107 have been admitted to various hospitals, according to the sources at the All India Institute of Medical Sciences (AIIMS) and Municipal Corporation of Delhi (MCD). The number is likely to increase due to the unseasonal rains, which create an ideal condition for the breeding of the vecmosquitoes, or aedis aegypti, responsible for the spread of disease.

Dengue haemorrhage fever (DHF), which is an arbovirus disease (arthropod borne virus), was first reported in Calcutta in 1963. If the government had taken strong preventive measures then, the problem would not have persisted, say health experts and epidemiologists. They attribute the spread of the disease to short-sighted planning and unchecked environmental degradation.

There is no vaccine to prevent dengue. The most effective way to fight the disease is to create conditions which make it difficult for the mosquito to breed.

Children below the age of 15 years are most susceptible to the fever and in 95 per cent of the cases, they are the victims.