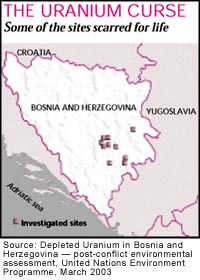 for the first time, it has been found that depleted uranium (du) used during the Bosnia and Herzegovina conflicts of 1994-95 has contaminated local water sources. Furthermore, the highly radioactive metal was found in air samples of some buildings currently in use, states a un report Depleted Uranium in Bosnia and Herzegovina -- post-conflict environmental assessment.

du is a by-product of the process to enrich natural uranium ore, which is used in nuclear reactors and weapons. It is an unstable heavy metal that emits ionising radiation. During their on-going invasion of Iraq, coalition forces have already used du ammunition. Recently, in Kifl, a small town about 130 kilometres south of Baghdad, the us tanks fired two du rounds straight down a main road, creating a powerful vacuum that literally sucked Iraqi guerrillas out from their hideaways into a street, where they were shot down or run over by the tanks.

Environmental and health impacts of du ammunition have been much-debated in the past decade. Very little scientific fieldwork has been conducted about the same.

The findings, released recently by the United Nations Environment Programme (unep), are based on data collected during a field survey conducted by an international team of experts from October 12-24, 2002. They investigated 15 sites that had been targeted with du weapons. The team used highly sensitive instruments to measure surface radioactivity. These measurements revealed the presence of contamination points and pieces of du weapons (penetrators) at three sites -- the Hadzici tank repair facility, the Hadzici ammunition storage area and the Han Pijesak barracks.

du contamination of the air was found at two sites, including inside two buildings. These buildings are currently in use, and unep recommends a 'precautionary decontamination' in order to avoid any unnecessary human exposure. The report explains that the air contamination is due to the re-suspension of du particles from penetrators or other contamination points due to wind or human actions.

In addition to these key findings, the unep team observed that workers and civilians, as well as military and mine clearance personnel visiting contaminated sites were unaware of, or misunderstood, the risks associated with du ammunition.

The findings are consistent with previous unep studies conducted in Kosovo in 2001, and in Serbia and Montenegro in 2002. But previous assessments in the Balkans were made shortly after the end of conflicts. In Bosnia-Herzegovina, seven years have passed since the conflicts. This time period has allowed the corroding du to penetrate the soil and contaminate the groundwater.

The claims of an increase in the rates of adverse health effects stemming from du could not be substantiated by the survey due to the lack of a proper cancer registry and reporting system. The un says that du used in the on-going Iraq invasion will probably have the same impacts as it has had on the Balkans, and therefore, its use needs to be evaluated comprehensively and carefully.