Waste hydrocarbons mixed with ethanol can be used to run vehicles 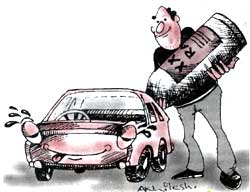 SCIENTISTS all over the world are working hard to find alternative energy sources which are environment friendly. Stephen Paul of Princeton University in New Jersey, USA, is also one of them.

Paul who has done research on nuclear fusion, believes that waste hydrocarbons might still be useful as vehicle fuels, if mixed with ethanol, which has higher octane rating and clean "designer fuel".

However, ethanol and waste hydro-carbons do not mix well. This problem can be solved by adding a third component to the mixture: methyltetrahydro-furan (MTHF), says Paul.

MTHF can be produced easily by fermenting wastes rich in cellulose or starch, such as corn- husks, straw, sugar-cane waste or paper-mill sludge. According to the tests, exhausts from vehicles powered by Paul "designer fuel" contain up to 50 per cent less unburnt hydrocarbon and 20 per cent less carbon monoxide than those produced by cars which run on conventional fuels.

The fuel, which is a mixture of ethanol, short-chain hydrocarbons and MTHF in roughly equal measure can be then utilised with the so-called flexible fuel engines, which are designed to run on conventional petroleum or petroleum mixed with ethanol. This was demonstrated by Paul by driving a Dodge minivan all the way from Princeton to Boston on one tank of the fuel, with enough remaining for another short ride to a closeby picnic spot. This is similar to what a vehicle would achieve on a tank of petroleum, said Paul.

The technology has been licensed to the Pure Energy Corporation of New York, USA, and the US department of energy classified it as "an alternative fuel". This should certainly encourage its use by companies involved in production of vehicles.