The Indian script is complex, the brain works hard to read it 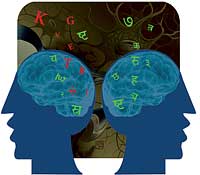 in the 5th century BC, an Indian scholar named Panini formulated 3,959 rules for the first ever grammar in Sanskrit. Centuries later western linguistic scholars realized how brilliantly Panini had laid the basic structure for languages which until then did not follow any form when written or spoken. Centuries later still, scientists took over. Now the focus is on the brain and how it makes a story out of an endless array of letters.

The effect of languages like English, Chinese, Japanese on the brain has been studied. Devanagrithe script used to write languages like Sanskrit, Hindi, Nepali, Marathiwas in the shadows until Tanusree Das and colleagues from the National Brain Research Centre in Haryana took notice.

The brain comprises two halves: the right and the left hemisphere. Studies on Chinese, Japanese, Korean and English show it is primarily the left half that turns on during word recognition.When the researchers in India asked right-handed volunteers to read phrases in the Devanagri script and examined their neural responses, they found the left hemisphere turn on.

But languages have their differences. English has its own ambiguities of whether one can or one may. Yet, the demands of this script is simple enough for the left hemisphere to handle. The ambiguities are a matter of chance. Chinese has a pictorial script. Japanese goes a notch higher with a combination of pictures and letters. Handling so much with only one hemisphere is not possible. As the eyes try to read such visually complex scripts, even the right hemisphere lends a hand.

Explaining Devanagri, Pradeep Kumar Das, linguistics professor at the University of Delhi, said: It is a script where words are written as they are pronounced. The vowels (matras) appear above, below, on the right and the left side of a consonant as compared to English which is written linearly.

Reading the complex matras requires additional visual processing which is accomplished by the right hemisphere, said Nandini C Singh, scientist with the National Brain Research Centre and an author of the study.

The human brain is bilingual. Yet that of a polyglot can coordinate several languages at once. A child effortlessly learns a language while growing up tells you it is a simple code. We have clearly not figured it out yet, said Singh.

What about the left-handed people? Most studies say that even in left-handed people the dominant hemisphere is the left. There are exceptions to the rule, said Singh. Current Science published the study in its October 10 issue.