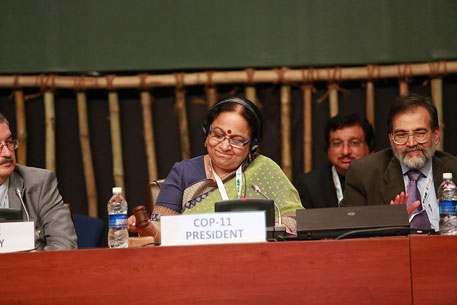 The eleventh United Nations Convention on Biological Diversity (CBD)  concluded in Hyderabad on October 19 after intense and elaborate negotiations on resource mobilisation  for implementing the ambitious Strategic Plan for 2011-2020 Biodiversity and the 20 Aichi Targets .

This was the most contentious issue  between developed and developing countries. The negotiations, which seemed never-ending and ran beyond midnight, succeeded in making the parties reach a consensus—developed countries will double their biodiversity-related international financial resource flows to developing countries, especially to the least developed nations, small island nations and the economies in transition; by 2015 at least three-fourth of the developing countries will make biodiversity their national priority and formulate national biodiversity plans and allocate adequate funds for implementing the plan. They also need to make proper assessments regarding fund requirements and the gap, and formulate framework for reporting on spending of funds.

When the Working Groups and Contact Groups failed to find a way out from the logjam on finance mobilisation, India took lead on the final day, using its role as host and president of the convention , and introduced a compromise text suggesting a middle path. But till the last moment, developed countries were not ready to accept this compromise text. They said they would double the fund flow by 2020 provided developing countries come up with proper baselines for funding and framework for reporting on the utilisation of the fund. Developing countries took the stand that for many among them poverty eradication takes the first in place on the priority list. Finally, developed countries agreed to give concession to the least developed and the poorest countries. In the final plenary session at 2 o’clock in the morning the text was adopted. Canada expressed its disagreement though it did not block adoption of the text. Other developed countries such as Australia and Japan welcomed the decision.

Developing countries are expected to prepare national biodiversity plans and make domestic financial provisions for implementing the plans by 2015 “taking into account national circumstances and conditions, and biodiversity is fundamental for economic and social development and eradication of the poverty, which are the first and overriding priorities of the developing country parties,” says the adopted decision. They have to provide adequate financial resources, prepare national financial plans and report domestic biodiversity expenditures as well as funding needs, gaps and priorities by 2015. The decision also says 30 per cent of the developing countries should have assessed and evaluated the intrinsic, ecological, genetic, social, economic, scientific, educational, cultural, recreational and aesthetic values of biodiversity and its components. 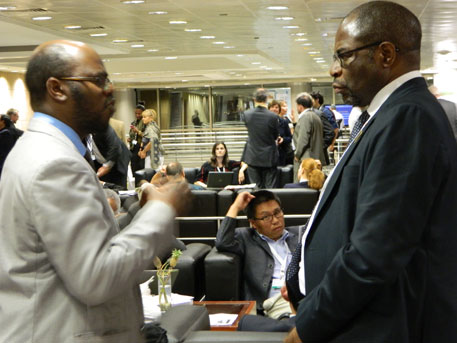 “It took tremendous efforts to resolve the issues regarding finance mobilisation but we could achieve it with the cooperation of all the parties,” said Jayanthi Natrajan, India’s environment minister and present president of CBD in the plenary session.

CoP11 decided to review, at CoP12,  progress towards the achievement of Aichi Targets for adopting the final target of resource mobilisation, the modalities of fund flows and reporting by the developing countries on how much funds they need for implementing biodiversity plans and how they will spend the funds.

CoP11 urged the parties to consider all possible sources and means that can help meet the level of resources needed to implement the Strategic Plan for Biodiversity 2011-2020 and the Aichi targets.

The convention also took decisions related to biodiversity and climate change, inland water ecosystems, marine and coastal biodiversity, protected areas, the rights of indigenous people, gender mainstreaming, biodiversity for poverty eradication and invasive alien species, bushmeat and wildlife management. It has been proposed that by 2014, countries will establish a target on the phasing out of subsidies and incentives which harm biodiversity. An elaborate report on the Ecologically and Biologically Significant Marine Areas has been released in the convention.

As for the Nagoya Protocol on Access-Benefit sharing, the convention has decided to hold a third meeting of the Intergovernmental Committee on Nagoya Protocol  to look into various issues.

“We consider CoP11 a success,” said Braulio Ferreira de Souza, executive secretary of CBD. “We hope we get adequate ratification for the Nagoya Protocol  to come into force before CoP12.”