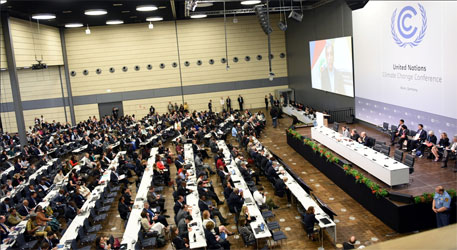 Right from the opening plenary of the Ad Hoc Working Group on the Durban Platform for Enhanced Action (ADP) on June 1, it is becoming increasingly apparent that pre-2020 ambition is going to be a key focus area in the ongoing negotiations.

In his opening remarks, COP President-Designate Laurent Fabius highlighted four pillars that would underpin success in Paris—a universal, legally-binding agreement; comprehensive and ambitious INDCs; adequate and reliable finance, technology and capacity-building for implementation; and the role and contribution of non-state actors. He also drew attention to the criticality of arriving at a decision on pre-2020 action for adoption in Paris.

At a side event, lead negotiators from Africa, China and India reiterated their solidarity in raising the concerns and demands of the developing world.

Su Wei and Ravi Shankar Prasad, heads of the Chinese and Indian delegations respectively, also reiterated that pre-2020 actions should be the first step towards the Paris agreement.

The lead negotiators also mentioned that for the first time, there were informal discussions among all the developing countries a day before the start of the ADP session. This was an important step for reconciling of priorities and demands of the most vulnerable countries.

The unity of developing countries is very critical, particularly of G77, to ensure that the needs of the most vulnerable communities are heard in the negotiations.

Why is pre-2020 ambition important?

As per the IPCC fifth assessment report, for the world to have a greater than 66 per cent probability of staying below 2°C, we are left with a carbon budget of about 1,000 Gt CO2e. Considering that the total emissions from the world are about 40 Gt of CO2e per year, unless there are substantial mitigation measures in the next 5 to 6 years, the world could exhaust about a quarter of the remaining carbon budget even before the post-2020 climate agreement becomes operational.

The remaining carbon space is essential for sustainable development of developing countries for producing food, building houses and low-carbon infrastructure. Carbon space will be required for the billions in Africa, Asia and Latin America to fight poverty.

Understanding the Lima Climate Conference: A proxy battle for the 2015 Paris Agreement