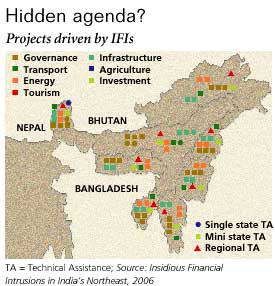 International financial institutions (ifis) avoid investing in troubled states. It just doesn't make good business sense. Then why do ifis such as the Asian Development Bank (adb) and the World Bank feel attracted to India's northeast? Does the vacuum of governance in some of these states suit the ifis or is there another explanation?

Recently, the World Bank held a meeting in Delhi to discuss the natural resources of the eight northeastern states and how to harness them. Earlier, in 2003, adb committed Rs 1,000 crore as lending in the region over the next decade -- an amount more than what the bank has invested in any part of India recently. The money is to be spent in states like Manipur and Nagaland that face entrenched conflict situations, as well as in the peaceful state of Sikkim.

The investments from ifis are coming in for everything, from sericulture to building roads, from power projects to rebuilding traditional weekly markets. They are impacting the region's social, economic and political life at a pace never felt before. The huge push of money has divided the civil society. There is one group vehemently opposing the investments, claiming that to each greenback a string pulled by a private investor is attached and that there is an agenda that the loans come loaded with. There is another group that believes that the region needs the investment to get out of the loop of under-development and conflict. There is also one small, albeit strong, group that believes that the conflicts are about sovereignty that the money pouring in is trying to divert attention from.

But all three groups converge on one ground: there is little information available on these investments (read projects) to enable a clear understanding of their impact. A recent report, Insidious Financial Intrusions in India's Northeast, by Intercultural Resources, an ngo based in the northeast and in Delhi, says the lack of information disempowers people even before the projects take off. The authors say that as of now it is extremely difficult even for organised civil society, leave alone concerned citizens, to get a handle on hundreds of consultancies, reports, discussions and meetings and to see a thread of transparency from the initial project preparation stages to actual implementation.

There is no formal system to ask for the information from the ifis involved. Much of what goes on between them and the government remains shrouded. A case in point is the way adb negotiated with the traditional leadership (a constitutionally empowered kingship system) of Shillong, Meghalaya, in the process of setting up a water and sewage system that critics claim might be the region's first city where urban utilities will be privatised iniquitously. There is no information on how these negotiations are carried out, what information is shared and what withheld.

In the debate on ifi investment in the northeast, there is one point of consensus: the ifis should be forced to share the information with public in a systematic and transparent manner. To do this, the working of the lending agencies should be brought more strictly under the scanner of Right to Information Act. It is imperative that people know more about the projects, and as importantly, how they have been negotiated.