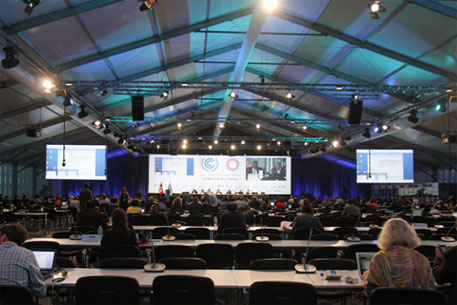 The Indian delegation at COP20 in Lima spoke at length with civil society bodies and journalists on Friday to clarify India’s stand in the ongoing climate negotiations as well as the country’s priorities in the run up to the crucial summit in Paris in 2015.

Sushil Kumar, a senior environment and climate change ministry officer, explained that India’s position at the conference is based on its obligation to address basic development needs such as food security, access to energy, providing water and sanitation, education and health, among others. India remains committed to reducing the vulnerabilities of its communities to extreme weather events and fighting climate change, but these challenges have to be balanced with the urgent and immediate development and adaptation needs of the country.

Considering these priorities, Kumar clarified that India won’t be announcing a “peaking year” for its emissions in a hurry just because other countries have done so, in a clear reference to the recent US-China announcement.

The remarks come at a crucial juncture when countries are preparing themselves for the decisive phase of negotiations beginning next week when ministers from countries will join the negotiations for the high-level segment.

The Intended Nationally Determined Contributions (INDCs) are an outline of the actions countries propose to take in the global fight against climate change and will form a critical part of the 2015 Paris agreement. The INDCs will be crucial in determining if the world will be on a low carbon pathway to a climate-resilient future or not.

Kumar explained that while India is in the process of preparing its INDCs, it is unlikely to be formally submitted before June 2015.  He further explained that the INDCs would be balanced and would cover all issues related to mitigation, adaptation, capacity building and transparency of action and support. The comprehensive submission would also include projections on support the country seeks in terms of finance and technology transfer.