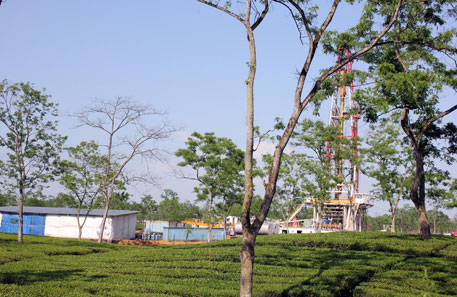 Assam’s Dehing Patkai Wildlife Sanctuary, the only sanctuary in India which is home to as many as seven different species of wild cats and a host of endangered flora and fauna, is threatened by development projects. The standing committee of the National Board of Wildlife (NBWL) has taken note of the situation and is planning a visit to the area.

According to an NBWL member, private firm Hindustan Oil Exploration Company, has proposed to drill three oil wells in a 2.3 hectare area of Dirock tea estate which is 1.5 to 5 km from the sanctuary. As per the Wildlife Conservation Act, any activity within a 10 km radius of a wildlife sanctuary needs permission from NBWL’s standing committee. The company says the drilling process would only result in a loss of 1.70 hectare of the estate's green cover. It says the proposed drilling is only to determine the extent of oil reserves in an area following discovery of reserves.

While the proposal was with the State Wildlife Board of Assam, local activists had raised concerns about the disposal of solid waste and effluents from the drilling. The proposal was sent by the state’s wildlife board, which is headed by forest and environment minister Rockybul Hussain, to NBWL in April. The board had laid down certain conditions for the proposed drilling which included a ban on mining/tunneling and discharge of wastes/effluents outside the project area. Further, the board said that to extract oil or natural gas, the company would require another clearance.

In another case, when Assam Petrochemicals Limited proposed to expand its methanol and formaldehyde plant in the area, NBWL, in a meeting held in June, found that the environment impact assessment report prepared by the Assam State Pollution Control Board falsely claimed that there was no sanctuary or wildlife reserve around the proposed site.

NBWL found that Dehing Patkai Sanctuary and the adjoining Joypur reserve forest were within a 5 km radius of the proposed expansion site. NBWL has now asked the company to provide the standing committee with a map of the area and the wildlife conservation plan authenticated by the chief wildlife warden of Assam. Incidentally, the principal chief conservator of forests (wildlife) of Assam recommended the project expansion without scrutinising the claims made in the EIA document.

A third developmental project threatening the sanctuary is also in the pipeline. Two open cast coal mining projects—Lekhapani and Tikok—owned by North Eastern Coalfields (NEC), a unit of Coal India Limited, 5 km from the sanctuary, have been recommended by the Forest Advisory Committee (FAC) of Union Ministry of Environment and Forests to NBWL on February 21, 2013. The proposal seeks a diversion 305 hectares of reserve forests to the coal mining projects.

According to the minutes of the FAC meeting, the coal projects would result in the felling of 373 trees in the forest which has a crown density (a measure of tree density in a forest) of 0.4 (categorised as “dense” by the Forest Survey of India). Although a compensatory afforestation on double the size of the area to go under mining was proposed by the Assam forest department, FAC found that areas earmarked for plantation were spread in patches across five forest divisions.

FAC has asked the state government to review proposed compensatory afforestation sites and ensure that the drive is conducted in a contiguous area, allowing free movement of big cats and elephants. FAC also noted that the certificates and documents in support of settlement of rights under the Forest Rights Act have not been furnished by the company. The committee has asked the Assam government to undertake a thorough habitat management of the wildlife in the area.

The 112 sq. km sanctuary on the foothills of the Himalayas is located in Dibrugarh and Tinsukia districts of Assam. According to Nature’s Beckon, a non-profit, it is home to seven species of wild cats—tiger, leopard, clouded leopard, leopard cat, golden cat, jungle cat and marbled cat.