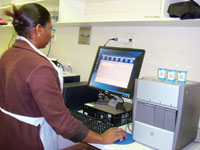 TUBERCULOSIS has been on the rise globally, and multi-drug resistant tuberculosis even more so. Of the estimated 9.4 million cases worldwide, around half a million are drug resistant.

India accounts for 1.98 million cases. Smear microscopy that tests the presence of tuberculosis bacteria is 125 years old and routinely misses half the cases. It takes two to three months to detect if the tuberculosis is resistant to drugs. But thanks to a technological step forward, the wait would soon be over.

Multi-drug resistant tuberculosis could now be detected in two hours, said a study published in the New England Journal of Medicine (NEJM) on September 9. The new technology is more sensitive, but as of now it cannot diagnose infection in areas other than lungs. The new molecular tuberculosis test—Xpert MTB/RIF—has been developed by Cepheid, a US-based developer of technologies for DNA analysis, in partnership with Foundation for Innovative New Diagnostics (FIND) and the University of Medicine and Dentistry of New Jersey (UMDNJ).

Xpert MTB/RIF is an automated molecular test for the presence of tuberculosis bacteria and their resistance to Rifampin, the most commonly used drug to treat the disease. The bacterium’s genetic material was probed for mutations within the Rifampin resistance- determining region.

The diagnostic test is carried out in a disposable plastic cartridge containing all reagents required for bacterial lysis, nucleic acid extraction, amplification and detection. The only manual step is the addition of a bactericidal buffer to sputum before transferring a defined volume to the cartridge. The cartridge is then inserted into the reading device, which gives results within two hours.

The team tested the method between July 2008 and March 2009, on 1,730 patients with suspected drug-sensitive or multi-drug resistant pulmonary tuberculosis in five centres worldwide—India, Peru, South Africa and Azerbaijan. The researchers said the new technology would play a vital role in developing countries, where TB is rampant and spreading.

“This innovative tool would enable health workers to do on-the-spot diagnosis,” said L S Chauhan, manager of the National Tuberculosis Programme In India. David Alland of UMDNJ said, “We designed this test so that two-three days would suffice to train technicians.”

D Behera, director, LRS institute of tuberculosis and respiratory diseases in New Delhi, said, “The world needs a technology that can produce quick results because delay in detection delays treatment and increases chances of spreading the infection.” Rajesh Gupta, pulmonary specialist at Max Superspeciality hospital in New Delhi is not as enthusiastic. He believes for best results such technologies should be used in combination with conventional culture techniques.

The technology also has its drawbacks as it does not lend itself for wider use. “It requires electricity. This is one limitation we are still working on,” said Mark Perkins, chief scientific officer, FIND. Another limitation is cost. FIND is negotiating concessionary pricing for public sector programmes in developing countries like India. The technology has two components, machine and test.

While machine costs around US $17,500, the test costs US $40-80. “We are aiming to reduce the cost to US $10- 20 for developing countries, including India. The prices will fall further as the volume of sale increases,” said Perkins. There are chances the test would work on tissue samples other than sputum; for example, on pus. This means the new technology could give rapid results even for extra-pulmonary tuberculosis.

“We have received very promising preliminary data from Hinduja hospital, Mumbai, on the performance of this test in extra-pulmonary samples,” said researcher Catharina Boehme of FIND, Geneva. About 20 per cent tuberculosis patients in the world have extrapulmonary TB, and it is rising steadily.