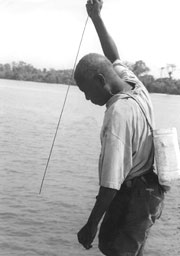 The documentary on the Onges tribe of the Little Andaman Island had an advantage that the panel discussion lacked. Sonali Dutta, the director, was showing rare footage. The panel discussion for most parts, on the other hand, was leaded with theoretical meanderings along known paths.

Sonali's documentary gave the audience a rare chance to watch the lives of the Negrito hunting-gathering tribe that is threatened with extinction. It's only the third film made on the tribe, the audience was told. The indigenous tribes of the Andamans are said to be the purest Negrito group of people left in the world. It is not yet known how such a small group of Negritoes reached these islands and then managed to remain in physical and genetic isolation from the region.

The documentary captures the Onges' traditional skills of fishing, making dugout boats and of surviving on their own terms with the forests. It goes on to provide evidence of the havoc wreaked by government policies and the illegal felling of forests in what was declared to be a tribal reserve way back in 1957. While the uniqueness of the footage is unarguable, the narrative binding the rather erratically edited images, unfortunately, does not go beyond the visually obvious. The attempt fails to delve deeper into the troubled waters of Onge life, remaining a perfunctory sketch. Yet, in a country where visual anthropology is, at best, at a nascent stage, it's a commendable venture.

Sonali's venture in fact fared better than the panel discussion that followed thereafter. Only two things redeemed the discussion. One, the nuggets of experiences with the Andaman tribes that panellists shared, and two, Pankaj Sheksaria's lucid description of how illegal forest felling has ensured the annihilation of the Onge way of life. Pankaj, a member of the Kalpvriksha Environmental Action Group, has researched the topic for years and is pursuing a case in the Supreme Court on the matter. He had a lot to share, including his anxiety about the Onges' future. So did I S Marwah of the department of anthropology, Delhi University, and T N Pandit, former director of the Anthropological Survey of India, the other two panellists for the evening. But the discussion ended at that. It fell short of prescribing any future course for government, researchers or policymakers. The audience was left with the unsavoury idea that the happenings on the Andamans are inevitable and irrevocable. Maybe they are. Pankaj and Sonali both said that history of Onge has a lesson to for us. Quite evidently, India is yet to learn it.