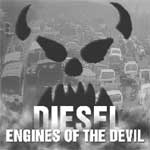 Dear readers,
"Want to buy a diesel car to keep your oil bill low? You may end up trading your life for cheap and toxic diesel. As companies go for hard sell of diesel cars, dieselmania grips you too. What was supposed to be cheap fuel for poor farmers is now driving the cars of the rich. Do not choose to ignore the fact that diesel fumes trigger cancer and pose a serious threat to public health. Cities like Delhi are already reeling under the effects of diesel-related pollutants like small particulate matter and nitrogen oxides. We have repeatedly brought to your notice studies which show that neither improving diesel quality nor upgrading engine technology can help avert the threat posed by toxic particulate pollution. The cleaner the diesel, the tinier the particulate matter, and greater is its health effect.

We face the challenge of reducing the particulate pollution load drastically in our cities. To keep you informed about the new global concerns on diesel we will bring this update to you every month."

Fine particles challenged on health grounds
A shocking report (Gambling with Public Health ii ) from the American Lung Association ( ala ) on small particles of less than 2.5 micron size informs that the proposed PM2.5 ambient standards of the us Environmental Protection Agency ( epa ) would still potentially expose 89 million people to serious health hazard. The epa has proposed a PM2.5 standard of 50 ug/m3, measured over a 24-hour period. But ALA has recommended 18 g/m 3 averaged over 24 hours, and 10 g/m 3 annually. This is frightening considering the fact that particles of PM10 size are not even measured regularly in India, let alone PM2.5. But even the limited monitoring of PM10 in Delhi shows that maximum levels reach as much as eight times the standards.

New research on harmful effects of diesel particles
Studies show that pm levels even below standards are dangerous. A recent study on the link between fine particles (PM10) and asthma in children carried out in Seattle, Washington, shows that even when fine particles are estimated to be below the national ambient air quality standard, it is associated with a 14 per cent increase in emergency department asthma visits for an increase of only 12 g/m 3 . A European study determined that exposure to traffic-related air pollution, 'in particular diesel exhaust particles,' may lead to reduced lung function in children living near major motorways. Yet another study has found that grass pollen allergens can become more concentrated in air polluted by fine particles, like those present in diesel exhaust, by binding to the particles. This may well be one of the reasons why air pollution exacerbates allergies and asthma. Another study of 1,498 children in 13 schools in south Holland found schools located close to freeways triggering asthma and chronic respiratory symptoms.

A report by the National Environment Protection Council of Australia says that fine particle air pollution accounts for at least 1,000 premature deaths nationally per year. nepc has noted that diesel fuel vehicles contribute approximately 80 per cent of all the vehicle-produced particles in major centres.

Limits to diesel technology
The usepa 's proposed Tier 2 emission standards (to be implemented from 2004) for light duty vehicles, including cars and minivans. and light duty trucks mandates similar emission standards for all vehicles regardless of the type of fuel they use -- gasoline, diesel or alternative fuels. The Engine Manufacturers' Association ( ema ) is worried as they feel that these are not feasible for diesel vehicles and will lead to a phase out of diesel technology. According to Greenpeace, in contrast to developments in petrol engines, no diesel concept currently exists which fulfils the Californian standards for "superclean" cars (Ultra Low Emission Vehicles, ulev standard). Even the newer diesel drives have 30 to 40 per cent higher nitrogen oxide emissions compared to petrol vehicles with catalytic converters.