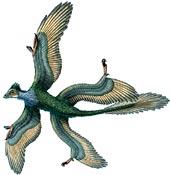 The 'birds evolved from dinosaurs' theory has received a further shot in the arm. Scientists in China have discovered the fossilised remains of a dinosaur with four feathered wings.

The dinosaur, a Microraptor, was about 90 centimetres long and lived about 130 million years ago, say scientists from the Institute of Vertebrate Palaeontology and Palaeoanthropology in Beijing. The dinosaur probably used the wings for gliding rather than flying, they speculate.

Six fossils of the creature were found in the Chaoyang Basin in Liaoning, China. The leg feathers of the fossils are reportedly arranged in a pattern similar to wing feathers in modern birds. The theory that birds are descendants of dinosaurs has gathered strength based on the numerous features the winged creatures share with a type of dinosaur known as theropods. Microraptors are members of that group.