The Indian detergent industry refuses to clean up its act 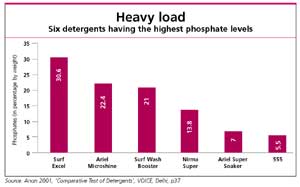 The research team, sponsored by the Shastri Indo-Canadian Institute, constituting researchers from India and Canada, tried hard to convince the industry to self-regulate. But the gathered detergent experts used the bogey of 'lack of data' to skirt responsibility. They refused to agree even to the watered-down proposals. The meeting ended with the research team giving up all hope of finding a real leader among those present. "If the detergent industry does not regulate itself today quite soon the courts will force it to," warned Brij Gopal, professor at Jawaharlal Nehru University and member of the research team at the culmination of the meeting.

He and his teammates have been studying the Indian detergent industry and its impact on the environment, drawing experience from how Canada and the us had managed the problem of phosphates in their freshwater bodies. Clive Southey, associate professor of economics and Narinder K Kaushik, professor emeritus, both at the University of Guleph, Canada, and Rakesh K Trivedi, at the Kanpur-based Harcourt Butler Technological Institute are the other researchers.

The researchers, in an unusual step for Indian academia, had decided at the end of their research to confront the industry with their findings and recommend hard decisions. "We didn't want it to be a mere academic exercise. We hoped the information generated could be used to take decisive steps," said Clive Southey. But the meeting saw their hopes being dashed to ground by the obstinate detergent industry.
The threat to the environment arises from the phosphate added to the detergents, they explained. Detergent manufacturers usually add sodium tri polyphosphate (stpp) to soften hard water. Hard water prevents cleansing of clothes with the same efficacy as that possible with plain water. stpp and other phosphates also help stabilise the alkalinity of the water, thereby increasing the action of the surfactants in the detergent. Surfactants keep the dirt dissolved in the water and prevent it from penetrating back into the clothes.

But once the washing is done, the phosphates get washed along with the dirty water into the waterbodies, streams, rivers, ponds and lakes. Phosphorus causes eutrophication in these waterbodies, leading to excessive growth of phytoplanktons and at times macrophytes. The algal content increases in the water and the subsequent death of algal bloom leads to consumption of the oxygen dissolved in water, creating hypoxic, and at times, near anoxic, situation. "This excess eutrophication can lead to fish kill, odour and increase in pathogenic animals," says N K Kaushik, It can also make water toxic.

The researchers shared with the gathered the fact that nearly all the fresh waterbodies in India were now eutrophic and nearly anoxic -- lacking in oxygen. And they put partial blame for the eutrophication of the waterbodies squarely at the detergent industry's doorstep.

Southey's studies show that the load of phosphate from detergents in waterbodies could range as high as 2.1-3.6 per cent. While the Indian manufacturers always quote a figure of below one per cent, Southey and Kaushik believe that to be a gross understatement. The other sources of phosphates are untreated effluent from the industry, excreta and run off from the agricultural lands, where pesticides are sprayed.

Kaushik showed how Canada and the us had once suffered similar problems in the great lakes -- the world's largest freshwater bodies -- and had taken stringent measures to resuscitate life back into the lakes. He reported it had taken the two countries nearly us $13 billion and a great resolve to remedy the problem. He narrated that the two countries had been caught napping and had paid the price for their complacency. He pleaded that a developing nation like India could not afford to sit and watch the problem grow out of hand. And he ominously predicted that the cost for India to bring its waterbodies back to life would be many times higher than what the two developed nations had borne.


His and Southey's pleadings, unfortunately, seemed to have fallen on deaf ears of the detergent industry. K P Venugopalan, representative of Albright and Wilson Chemicals India Limited -- the largest manufacturer of stpp in the country -- said at the meeting, "There is no conclusive evidence that detergents are to blame for the eutrophication. And if it is the contribution of phosphate by detergents it is not more than one per cent. The rest of the phosphates come from agriculture, human waste and other sources." V G Kumar of Unilever Limited too voiced similarly dubious reservations, "There is no hard data. We must see conclusive proof before we change our products."

Brij Gopal countered such digressive arguments by stating that, "There are thousands of studies, albeit scattered, showing that nearly all Indian waterbodies are today near anoxic. A comprehensive study of phosphates from detergents may help but it is clear that they have a distinct role to play in this catastrophe." He pointed out that in the Indian conditions the danger of eutrophication was much higher in shallow bodies than in the us and that it was unscientific to pass the buck on to run offs from agricultural fields. "In summers, when the streams and rivers run dry, the phosphate-laden pesticides cannot flow into the waterbodies and then detergents contribute nearly 6-7 per cent of the deadly load. The tendency to put the entire blame on other's doorstep is unfortunate," he said.

To this the Proctor and Gamble (p&g) representative protested that the detergent industry in India used only about 38,000 tonnes of stpp and most of the products had minimal percentage of it. But Trivedi mentioned that some soaps had as high as 30 per cent stpp by weight in their detergents (see graph: Heavy load). p&g as well as Unilever repeated ad nauseum that there was inconclusive evidence. But the representative from the Delhi-based non-governmental organisation (ngo), Centre for Science and Environment countered, saying, "If there is enough circumstantial evidence to prove the case then the precautionary principle should be employed to stop the use of phosphates in detergents. One cannot wait for the problem to blow up till the evidence arrives."

Venugopalan claimed that European Union standards actually recommended far higher percentage of stpp in detergents than was present in Indian detergents. To this Brij Gopal immediately rebutted: "Do not make such irrational comparisons. Europe and other developed nations have very good tertiary water treatment plants in place to treat the phosphates. India does not even have primary effluent treatment plants. And anyway why not prevent the pollutant in the first place rather than clean it later at a much higher cost to the society?"


The researchers suggested a self-regulatory standard of five per cent phosphate by weight. The suggestion was made keeping in mind that most of the detergents already contain phosphates below this level. But the adamant detergent representatives present refused to budge from their position. While some called the limit arbitrary, others said there was no reason to believe that it would help at all to limit eutrophication.

As a compromise and a dilution of their recommendations the research team suggested that the detergent industry at least label the amount of phosphates contained in their products. Brij Mohan said, "If you are not ready to regulate yourself, we'll inform the public how harmful phosphates are. You just give them the information to decide what's best for their use." The industry vehemently opposed the proposal. Venugopal said, "How can we label our products voluntarily?Only if the government passes a regulation asking us to do so will we agree to such an idea." Kumar and others also sang the same tune. Finding the industry unrelenting, Malvika Chauhan, a scientist at the school of environmental sciences of Jawaharlal Nehru University, proposed that the gathered at least agree on paper that eutrophication was a problem in India and that detergents were adding to the crisis. The industry shrank away from committing itself to any action or statement. While some said they were not sure whether eutrophication was actually a reality, others claimed that detergents should not be singled out.

Finding the meeting a futile exercise and the detergent industry as ineffectual as the petroleum and auto industry in cleaning up its act, the researchers decided not to bang their heads against the wall. Southey reminded the Indian industry: "The us and Canada have heard the same excuses you are putting forth today. The detergent industry there had to relent and improve. I hope so do you and that you do it by choice and not force."

Brij Mohan summed up the character of the industry well: "They could have become market leaders by using the green tag as a ' usp', instead they react inertly to the changing environment." Representatives of Henko and Fena, two detergent manufacturers who have shown the leadership and the vision to shift to zeolites -- a cleaner option to phosphates -- concurred that they had developed their own niche in the market. But their dirtier cousins in the industry walked out of the meeting promising not to turn their products green but to let the waterbodies in the country turn an algae-ridden jade.