Most severely and consistently excluded groups are women, Adivasis, Muslims and the disabled, confirms India exclusion report by NGO 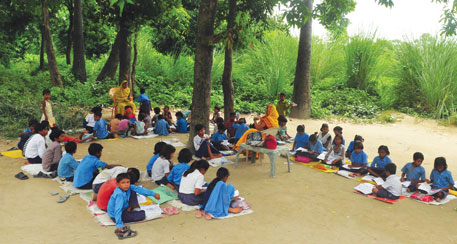 A recent report by a Delhi NGO undermines government claims on reaching welfare schemes to the needy and disadvantaged sections of society. The report, titled The India Exclusion Report 2013-14, says the government has failed miserably in providing equal access to public goods to the most disadvantaged groups.

The report, prepared by Delhi-based Centre for Equity Studies, reviewed access to four essential public goods—school education, urban housing, decent work in labour markets and legal justice in relation to anti-terror legislation in India. The yet-to-be published report has been exclusively accessed by Down To Earth.

One of the striking findings of the report further confirms the general view that the most severely and consistently excluded groups are women, Adivasis, Muslims and the disabled.

The poor quality of government schools force disadvantaged groups to look towards private schools which are marginally better. But then most of them are unable to access these schools.

This is in spite of the fact that right to education is a fundamental right. Says the report: “..a publicly guaranteed Right to Education lies in the grim and dark reality of millions of children in the country who, due to the specific nature of their vulnerabilities, continue to be deprived of education. This, coupled with the discrimination faced by children within schools, and the continued inequality of educational opportunities for children based on the accident of their birth, means that India’s children require the right not just to free and compulsory education, but the right to free, compulsory and equal education.”

Providing shelter to its citizens is another area where the state has failed. The report pitches for housing facility which can be used as collateral for financial credit. Besides, a decent shelter aids in better health, education, psycho-social development, cultural assimilation, identity and economic development.

The report gives an example of how decent shelter helps in ameliorating the condition of marginal workers. As a bidi worker and member of the Self-Employed Women’s Association (SEWA), Manjuben, says, “My house is my asset, my savings, my workshop and my place to rest and belong”, the report quotes.

The report advocates making housing a right as in other countries like South Africa. The report also points to different courts rulings in which court advocated for the provision of right to shelter in the Constitution.

The report defines decent work as productive work by men and women in conditions of freedom, equity, safety and dignity. The Constitution does not guarantee right to work as such but there are at least 44 Central labour protection laws, innumerable state laws and a law for social protection of unorganized workers. Besides, there are special laws that prohibit exploitative labour arrangements like boundless contract labour, bonded labour and trafficking for labour exploitation.

However, the report shows the state has thus far failed a large section of the population by not ensuring equitable and sustained access to decent work. The state even failed in sufficient employment creation, protecting rights of employees and providing social security support system for those who are unable to secure employment.

The report closely scrutinises access to justice in the context of terror laws. It points out that by  design and implementation, terror laws are unfair.

The report points to frequent violation of fundamental rights under Articles 21 and 22 of the Constitution that provide against arbitrary arrest and detention.

The report says the government needs to ensure fair investigations and establish strict monitoring mechanism of all anti-terror cases. Apart from it, police should also be made accountable for extra-judicial measures like torture and killings; this can be achieved through increased representation of marginalised groups in police forces.

Absence of large-scale, credible and empirical data on exclusion is also perpetuating the problems. According to report, there is large amount of anecdotal evidence that point to exclusion of certain groups. This exclusion is also visible in government budgets and programmes.

In the case of school education, there are serious questions on the reliability of the District Information System on Education (DISE), the primary official source of data on access and quality of school education. DISE relies solely on information provided by teachers, without a process of community or parental participation. It focuses on collecting information on enrolment levels, not actual school attendance, and provides highly inaccurate estimation of access to education.

In case of urban housing, the only source of data are Census surveys, conducted every 10 years. There is limited information available on the conditions of the housing of poor — slum dwellers, residents of illegal settlements and unplanned colonies, or those living in congested and poor quality houses.

There is paucity of data regarding labour markets. The report points to complete lack of information on the nature and terms of employment, particularly in the informal sector. This is also reflected in the state’s unwillingness or inability to accurately count the large number of people working in exploitative labour conditions, like child workers, bonded labour, migrant workers, home-based workers, domestic workers, and manual scavengers.

The government has also made no attempt to collect data relating to persons charged under anti-terror laws and their socio-economic backgrounds despite large number of complaints of misuse of power by police.

The report talks about need of holistic measures to counter all types of discrimination.