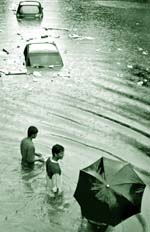 india's commercial capital Mumbai recorded its highest ever rainfall of 944 millimetres (mm) in 24 hours on July 26-27, 2005. The city was flooded, with water levels as high as three-four metres in some areas. A total of 452 people had died due to the disaster by August 6, 2005; the state's death toll was 1,056. Losses were pegged at over Rs 9,000 crore and the state government sought financial help from the Centre. Thousands of people were stranded on Mumbai roads for over 16 to 20 hours (some died of suffocation in their cars), while many areas had no power and water supply for days. Road, rail, and air traffic came to a halt and communication networks jammed. Apart from Mumbai, the situation was also grim in other parts of western Maharashtra, especially Raigad and Konkan areas.

The state administration's response was delayed and unsatisfactory.As animal carcasses and waste are dumped all over the city, the fear of an epidemic looms large: cases of cholera, gasteroentritis and suspected leptospiroris have already been reported. Chief minister Vilasrao Deshmukh says the government alone can't be held accountable. He claims nothing is wrong with Mumbai's drainage system, which can carry 25 mm rainwater an hour. But Mumbaikars point out that most low-lying areas are flooded during monsoons every year. They recently staged a rasta roko (road blockade) at 16 places and a rail roko (rail blockade) in protest.

While a disaster management plan (dmp) was prepared for the city in 2003, no part of it came into action on the ill-fated day. The dmp calls for augmenting the city's storm water drainage capacity. In 1993, the Brihanmumbai Municipal Corporation (bmc) had prepared the Brihanmumbai Storm Water Drain Project to double the capacity of storm water drains to 50 mm per hour and also widen Mithi river, but the project was never implemented. Only recently, the prime minister announced providing funds to implement it; the cost has escalated from Rs 650 crore in 1993 to Rs 1,200 crore.

Experts have also zeroed in on a few other factors that led to the disaster: dereserving development zones for construction; encroachments around rivers; builder-driven, ill-planned projects; crumbling, century-old drainage system; reckless reclamation and filling up of low-lying areas. A mere glance at the Mithi river, which empties in Mahim creek, is an eye-opener. Due to massive reclamation for construction, only a third of the original river is left for water to drain out. Various studies in the past have cautioned against such constructions. No wonder, Kurla and Kalina areas, adjacent to the river, were among the worst-hit. In a knee-jerk reaction, Deshmukh has ordered the setting up of Mithi River Development Authority to look into issues like removal of encroachments and pollution.