Dual flush systems could help save a flood of water, proves research 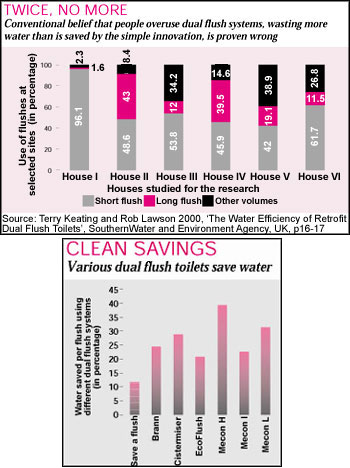 allow retrofitting of dual flush toilet systems in the uk, says a recently published report. The research was carried out by SouthernWater, a uk-based company and Environment Agency, a uk-based non-governmental organisation.

The study of the dual flush toilet system has found that replacing single with dual flush cisterns can generate average water savings of 27 per cent in uk households. As a result, Environment Agency is calling for a relaxation in the laws prohibiting retrofitting of dual devices on existing toilets.

The dual system works by allowing the user to choose between a less-water intensive flush, usually three litres, and a longer six-litre flush. Dual flush toilets are actively encouraged across America and Asia, and are mandatory in Australia for new bathrooms. The Australian non-governmental organisation, Savewater, estimates that dual flush toilets have helped Australia save as much water as entire cities of Adelaide and Perth use annually. European countries such as Denmark and Sweden too have for the past decade been converting to dual flush systems.

In most countries, households can choose between installing a new toilet or retrofitting a device on their current one. But under uk law, from 1993 dual flush cisterns were prohibited until the Water Supply (Water Fittings) Regulations 1999 came into force. Dual flushing in new installations is now permitted, although the replacement of existing cisterns is still prohibited.

The original ban in 1993 and the continued ban on replacing cisterns are largely based on the concerns about double flushing. If inappropriate or inadequate devices are installed, and a light flushing is insufficient to clean the pan, users may be obliged to flush a second, or even third time, negating the benefits of the dual system.

The study was carried out over eight months using five retrofit devices in West Sussex. It required the relaxation of byelaws prohibiting the use of dual flush systems. The study compared the average volume per flush before and after dual flush installation.
The average dual flush saving observed during the trial was 27 per cent -- equivalent to a around 2.6 litres per flush. But there was a high degree of variability in the savings observed at the individual property level, from a maximum saving of 64 per cent to a net increase in use of 28 per cent. The 27 per cent average savings resulting from dual flush installation compared to an 11 per cent average saving observed at 16 properties that had the save-a-flush bag installed.

The study has demonstrated that double flushing does not necessarily increase significantly as a result of dual flush installation. This is a notable finding given previous misgivings about dual flush technology. In addition, it was shown that savings were greater in smaller households with one or two occupants, compared to larger properties with bigger families. The results also indicated that savings were greater at properties with only one commode. The study has been based upon a relatively small number of properties, therefore, any extrapolation of the results on a wide scale should be treated with caution.

However, the results are encouraging and taken at face value it is estimated that the blanket installation of dual flush systems in uk could reduce domestic consumption by some eight per cent, equivalent to a national saving of 670 million litres per day. There also appears to be an incentive for metered households to install dual flush because the study has shown that the purchase and installation costs of the retrofit kits could be recovered in about one year.