Nearly 1,400 litres of the banned pesticide found in Kasaragod godowns 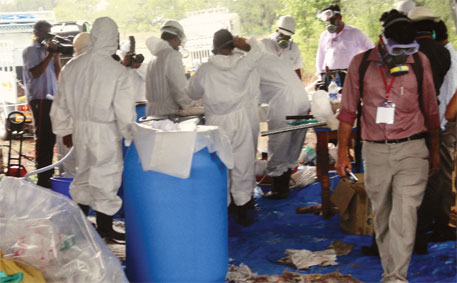 KERALA has started disposing of expired stocks of endosulfan. A task force, chaired by deputy collector of Kasaragod district, started Operation Blossom Spring at a Plantation Corporation of Kerala (PCK) godown in Kasaragod on June 17.

In Periye, six barrels of expired endosulfan stock were transferred into UN-certified high density polyethylene drums for safe packing. Samples of the pesticide were sent to Hindustan Insecticides Limited (HIL) and state pollution control board for analysis. After analysis, the stocks will be detoxified and then disposed of. Similar exercises were done the following days at PCK’s other two godowns in Rajapuram and Cheemeni estates. Nearly 1,400 litres of endosulfan was found stocked in the three godowns after ban on the use of pesticide in Kerala in 2001.

Endosulfan was banned in cashew plantations in Kasaragod after studies showed its aerial spraying was severely affecting the health of the people living in and around the plantations. Kasaragod is still reeling from the serious health impacts of 20 years of aerial spraying. It has affected nearly 4,280 people, killed 734 and made 66 bedridden, according to a 2012 state report.

When the godown at the Cheemeni estate was opened, not a single drop of endosulfan was found in the barrel; it had solidified. “The godowns reeked of endosulfan. Clearly, it had leaked. The soil, sacks, wood, saw dust and a few other things that were kept in the godown have been taken for decontamination and disposal,” says Mohammed Asheel, task force convener of Operation Blossom Spring. The first stage of safeguarding the site has been done. “The next step will be environment friendly disposal,” adds Asheel. The lab results are expected within a month and then a decision will be taken on the disposal. “Once we are sure of what the endosulfan stock has converted to—alpha endosulfan, beta endosulfan, endosulfan sulfate or diode—they can be taken to secure landfills. The results will also tell if these are endosulfan alone or a cocktail of pesticides,” says C Jayakumar of Thanal, a non-profit working in the endosulfan-affected areas in Kerala. Another option the task force is toying with is to send the stocks to the pollution control board which can identify facilities for disposal, he adds.

With the first stage of the operation completed, the task force—set up by the state agriculture minister K P Mohanan in April—has also asked the district retailers and farmers to bring in any leftover stock for safe disposal.

Referring to the operation, Asheel says, “This is a rare incident when the detoxification of endosulfan is being done with complete transparency and public participation.” The operation was carried out in compliance with the guidelines of WHO, FAO and UN’s Stockholm Convention on handling persistent organic pollutants. Consultations were held with HIL and Kerala Enviro Infrastructure Limited for the management of the waste that would be produced after detoxifying. The state has formed a monitoring committee to keep a tab on how the disposal is being carried out. Jayakumar is one of the members of the committee.

The task force was constituted to allay the concerns of the residents who complained of foul smell from the godowns at Periye and Cheemeni estates last year. The smell was due to the leaking rusted steel drums containing expired endosulfan. It was found that neither of the three godowns had storekeepers, fire safety equipment or first-aid kits. These godowns are located near villages, water bodies and farms. Before the operation began, the task force had decided not to open the godowns because it could cause contamination.

District collector V N Jithendran, who reviewed the godowns on June 19, has asked the task force to prepare a draft report of the final phase of the detoxification process.