Forty years after the Emergency was declared, India must revisit its legacy of dissent 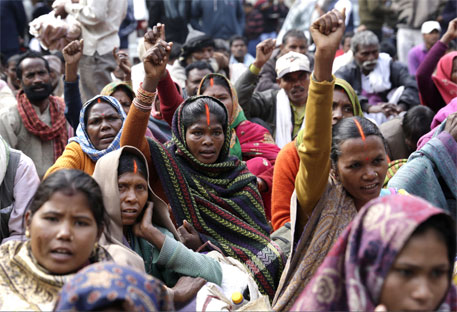 This is a bad season for NGOs. Two weeks ago, Russian president Vladimir Putin signed a Bill allowing foreign NGOs to be banned on grounds of national security. Individuals working for banned organisations could face fines and jail terms, and bank accounts of such organisations could be frozen.

Though the new law claims to fill an important gap in China's legal code by formally listing requirements for registration of foreign NGOs, it also prohibits a broad range of ill-defined activities, including those that could undermine “ethnic harmony”, violate "Chinese society's moral customs" and incite resistance to state laws or regulations. These are so vaguely defined that they could prohibit NGOs from working in areas like environmental protection, health and cultural exchange. Interestingly, the proposed law puts the management of foreign NGOs under the jurisdiction of the national police ministry.

Closer home, Pakistan is putting a stricter regime in place for monitoring and scrutiny of foreign NGOs currently operating in the country. All foreign NGOs have been asked to re-register in the next three months. Pakistan has accused foreign NGOs—including some allegedly funded by India—for “anti-state activities”.

In India, we read every day about some government policy or the other to “regulate” foreign and foreign-funded NGOs.

So, why are governments worried about NGOs?

In 2012, an intelligence report linked Save the Children, an international NGO that works in 120 countries on children’s health and education, to Pakistani doctor Shakeel Afridi. The US Central Intelligence Agency (CIA) had allegedly used Afridi to carry out a fake vaccination programme as it searched for Osama bin Laden.

Save the Children was recently asked to leave Pakistan even though the group has denied any links with CIA or Afridi. Pakistan has now hardened its policies towards foreign-funded NGOs, accusing them of being covers for spying operations of countries like the US and India.

In Russia, it is a different story. Putin is clamping down on all kinds of dissent; unsanctioned mass demonstrations are being prohibited and huge fines are being imposed on participants. The Ukraine crisis and the sanctions imposed by the US and other Western countries have given Putin an opportunity to clamp down on any dissenting voices in the name of national security.

China, on its part, would rather have GONGOs than NGOs. GONGOs, or “government-organised non-governmental organisations”, are set up by the government and are generally believed to represent an indirect means of state control. They get funds from the state as well as from national and international donors. China wants to slowly push foreign and domestic NGOs out and replace them with GONGOs. China’s discomfort with NGOs is driven by fear that foreigners are secretly plotting to overthrow its one-party state.

What about us? Why is our own government fearful?

Governments in India—the current NDA one included—have always had uncomfortable relations with NGOs, especially with those working in areas like environment, human rights and minority and tribal rights. Many regressive policies on NGOs were actually initiated by the erstwhile UPA government and its home minister, P Chidambaram. Interestingly, Chidambaram, now again a lawyer, recently wrote a “lawyerly” article exhorting people to speak up for tolerance and dissent!

It was the UPA government which provided a new—and convoluted—definition of NGOs in the Foreign Contribution Regulation Act (FCRA), 2010, and its Rules, 2011, and then in the Income Tax Act. As per the present definition, industry bodies such as CII and FICCI can be deemed NGOs, can receive foreign grants, and need not pay taxes. A bonafide NGO working for environment protection, on the other hand, might get rejected. It was also the UPA government that brought in vaguely-worded conditions in the FCRA, which provide the government with the tools to harass NGOs.

Most importantly, it was the UPA government that asked the Intelligence Bureau to prepare the report on NGOs. The report, now used by the NDA government, identified several foreign-funded NGOs for “negatively impacting economic development”. The present NDA government is continuing with the past policy, but with a new vigour.

I believe the answer to all the above questions is negative.

We are a country that worships people who have expressed dissent against majoritarian viewpoints. Our heroes are dissenters—Buddha, Swami Vivekananda, B R Ambedkar and Mahatma Gandhi. A country with such a rich culture of opposing majoritarianism cannot be intolerant of different voices.

The question we all need to ask is why NGOs opt for foreign funding. The answer is simple: because domestic funding is not available when it comes to many causes for the advancement of society. Will the Indian government and private foundations fund NGOs to fight against industrial pollution? The answer is no. Will some philanthropic foundation give money to an NGO to protest against the hazards of nuclear power plants or mindless building of dams in the upper reaches of the Ganga? The answer is a resounding no. What about protecting rights of minorities and tribals? Absolutely not!

The list is unending. Today, NGOs can either sustain themselves by becoming consultants to industry or governments, or close shop.

It is important to understand that NGOs protesting against hazards of nuclear power or industrial pollution or human rights violations are not anti-national. They do this because they believe these are bad for the nation. We, the majority, might not agree with them, but we cannot muzzle their voices.

Clamping down on NGOs that speak and advocate differently will only breed intolerance. Today, it is the foreign-funded NGO. Tomorrow, it will be domestically-funded cultural groups. The day after, it could be any group that has a dissenting voice. This is the thin edge of the wedge. Arbitrary actions against NGOs will make Indian democracy intolerant and feeble. Our founding fathers would have been dismayed by these developments.

We should not forget that our tallest leaders supported and established NGOs. All the institutions set up by Mahatma Gandhi are NGOs. Many of the Gandhian institutions receive foreign funds. Even the hyper-nationalist Rashtriya Swayamsevak Sangh and its associate institutions are NGOs. Many of them receive foreign funds too. Targeting foreign-funded NGOs by calling them “foreign agents” is disrespectful to a large number of citizens who are no less patriotic than those working in the industry or the government.

It is important to remember that FCRA was enacted during the Emergency in 1976 to counter the “foreign hand” in activities of the opposition parties. Many of those who were in opposition then are in power now. It is a pity that the tools they are using to silence their critics today are the same tools that were used against them 40 years ago.

On the 40th anniversary of the Emergency, it is worth reminding ourselves that India is India because it is not Russia, China or Pakistan. Democracy and dissent go together.

People and public sphere in India