Are quasars near or far? Doubts appear as the astronomical calculator, red shift, is challenged 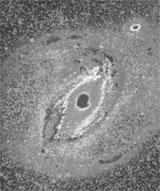 quasars are among the most fascinating objects in the universe. These relatively small objects are believed to be at the far edges of the universe. Given their distances, the amount of energy received from them is truly enormous, leading to one of the great unsolved mysteries of cosmology: what is the source of this amazing amount of energy coming out from relatively small objects? There have been many theories which purport to explain the fantastic energy output of the quasars, but none of them is completely satisfactory.

But there is another way out of the puzzle: what if the quasars are not really as far away from us as they are believed to be? Then the estimated energy output falls drastically and we do not need a special mechanism for energy generation. This is exactly what Halton Arp of the Max Planck Institute at Garching is claiming. He and his colleague, Hans-a Dieter Radecke have analysed 24 Seyfert galaxies (based on data from the x-ray satellite Rosat) and found at least 12 of them with accompanying pairs of x-ray sources, aligned on either side of the galaxies.

The alignment of these x-ray sources, which are almost certainly high red shift quasars, implies that the galaxy ejected the quasars and the red shifts of the quasars are somehow intrinsic and have nothing to do with the distance of the quasars. At the heart of the whole matter is the reliability of the method of distance measurement in cosmology. The basis of distance measure is the cosmological red shift which, it is believed, comes from the expansion of the universe.

The more distant the object is, the faster it is receding from us and consequently the light emitted by it is shifted towards the red end of the spectrum. By measuring the red shift of the light emitted by an object in the universe, astronomers can determine its distance from us. Arp's contention is that this kind of alignment in 12 of the galaxies is almost impossible by pure chance and that the galaxies ejected the x-ray pairs on either side by some yet to be discovered mechanism. The astrophysical establishment is however being more cautious. The general feeling is that the sample size (of 24 galaxies) is too small to come to any definite conclusion. The alignments could be by chance and the smallness of the sample size makes it look more important than it actually is.

Though Arp has a reputation for being a maverick of sorts, his latest findings are sure to generate a lot of heat and astronomers are trying to look for other effects which will substantiate (or negate) his ideas. If he is proved correct, the standard cosmological theory may be in deep trouble (Science, Vol 274, No 5291).