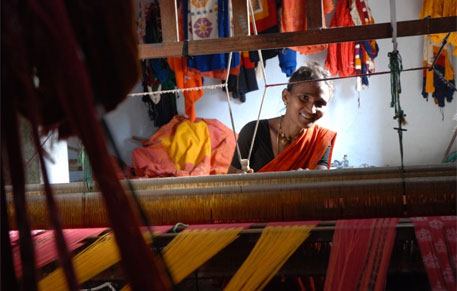 Narmada S, resident of Sansthan Narayanpur village in Nalgonda district of Telangana, has never heard of Union finance minister, Arun Jaitley. She also does not understand how a single man can decide the fate of her family and many others in her village. What she knows is that handloom weavers like her will not survive for long.

“We are struggling for the past 10 years. While the cost of living has gone up on the back of rising education and health expenditure, our wages continue to be low. This is pushing us into debt,” says she.

Narmada is a member of the ikat weavers’ community. Ikat (Pochampally variety) is woven in Nalgonda and parts of Warangal districts. She has two daughters—the elder one is married, and the younger one is studying for her graduation. “Earlier, I would only help my husband in weaving. But now I have started working for a catering company for money,” says she. On an average, her family earns Rs 7,500 a month. “But all three of us need to work to earn this much,” says she.

In the ikat weaving community, women prepare the yarn and men do the weaving. “Some of the families that are exclusively dependent on weaving earn as low as Rs 1,200 a month. For single mothers, it is just Rs 350 a month,” says Narmada, adding that the scenario changes for people who are enrolled under the government’s Mahatma Gandhi National Rural Employment Guarantee Scheme (MGNREGS). “An MGNREGS family earns a few hundred rupees a day,” says she.

Jayalakshmi, another resident from the same village, agrees with Narmada. “It is very difficult to sustain our livelihood. Not just the cost of living, the input cost of cotton and silk yarn is also increasing. Additionally, banks refuse to lend us money. Many of the families are on the verge of committing suicide,” says she.

Ask them about the solution, and both say the government must provide low-interest loans for working capital. Donthi Narasimha Reddy, chief advisor of Chetna Society, a Hyderabad-based non-profit working for the welfare of Pochampally weavers, says the Central government’s weaver-unfriendly policies and reduced fund allocations for the handloom weavers is killing the sector.

He says the handloom sector has a turnover of Rs 60,000 crore per year, which is just half of the actual demand.  Reddy adds India’s handloom exports have reached Rs 4,000 crore per year and that 30 million people depend on the sector for their livelihood.

“It is eco-friendly and the country already has the required technology and skills. Even then, the Central allocations for handloom sector are going down, which is pushing the weavers into severe distress,” says he (see analysis of budgetary support for handloom pdf).  A glance through the previous budgets is enough to understand what has led to the dismal scenario. In the 2012-13 budget, the allocation for the welfare of the weavers under various schemes was Rs 2,960.50 crore. It decreased to Rs 494.50 crore in 2013-14. In the last budget, it was further reduced to Rs 328.5 crore. If the Rs 292 crore that is allocated under the national Handloom Development Programmme is added to this, the total allocation is Rs 628.5 crore. 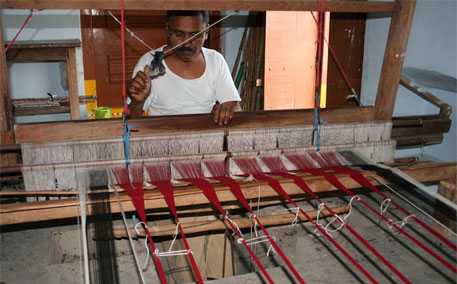 Reddy points out that handloom sector invests more than Rs 25,000 crore on cotton yarn and Rs 9,500 crore on dyes and chemicals every year. He says most of the demand is met by private moneylenders who charge interests between 18 and 24 per cent per annum.

“Given the employment potential and its contribution to the country’s GDP, the government must increase the budget allocation to at least Rs 5,000 crore and ask the National Bank for Agriculture and Rural Development to increase the credit availability for handloom sector from the current Rs 75 crore to Rs 10,000 crore,” says Reddy.

While the Modi government had promised Rs 6,800 crore in the budget to help weavers pay off their loans, the last interim budget allocated only Rs 2,205 crore. “At that time, we had pointed out that this package needs to be reconsidered. The allocation for such package is a mere six per cent of the total annual turnover volume of handloom sector,” says Reddy. More importantly, the amount actually spent is much lower than what is allocated in the budget, he points out.

“Let us hope that at least the first full-fledged budget of the Modi government will do justice to the distressed handloom sector and the country’s weavers,” he adds.