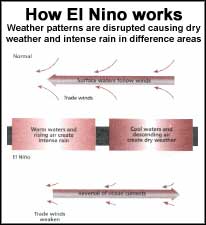 EL NINO, the reversal of ocean currents across the Pacific that periodically disrupts the world's weather, has won another round of its cat-and-mouse game with climate modellers by sneaking up largely unseen. In the past two months, waters in most of the tropical Pacific have warmed dramatically, by up to 2'c in places, as surface water from the western Pacific and storm systems that normally remain over Indonesia have migrated eastwards. The events herald the onset of a new El Niho, according to an alert issued earlier this month by the us National Oceanic and Atmospheric Administration (NOAA).

"The consequences will probably be felt worldwide over the coming year," says David Parker, an El Niho tracker at Britain's meteorological office, Black- well. The new El Niho will increase the risk of serious drought in Australia, India, Brazil and East Africa. It will also heighten the danger of torrential rain and floods in American deserts from Peru to California, and of forest fires in Indonesia (New Scientist, Vol 154, No 2084).

El Niho will also add to global warming. "So far, 1997 is already the second warmest year ever, so we could see a new record," says Parker. The warm surge will probably peak at the end of the year -just in time for the climax of negotiations at a meeting of the UN Convention on Climate Change in Japan in December, which is scheduled to approve tough new emissions standards for greenhouse gases.

Many climate modellers who have prided themselves on predicting El Nifio up to a year ahead have been caught out this time. "We are scratching our heads as to why our models didn't anticipate it," says Stephen Zebiak of the Lamont-Doherty Earth Observatory at Columbia University,_New York. Zebiak and his colleague Mark Cane, widely regarded as the world's top El Niho forecasters, successfully predicted the onset of the last two major El Niho events, in 1987 and 1991.

But they failed to predict that the 1991 El Niho would remain for an unprecedented three years, rather than the normal nine months or so. And now the latest event has eluded them - last November, their forecast was for 11 cooler than-normal conditions through July 1997". "Our most recently revised model still isn't seeing it," says Zebiak. "It is predicting an El Niho for 1998," he adds.

He has one hope, though: "It is just possible that this will prove to be a false start. Sometimes, it looks like an El Niho is beginning and then it falters, returning for real the following year. Otherwise, its back to dravhng board. We'll need to look in detail both at the model and the data we put into it."

Most other teams of El Niho forecasters are in the same position. The failures suggest a hard task ahead for climate prediction, being set up by NOAA, with collaborators from Australia, Brazil, Japan and Taiwan. The institute's first task is to improve the forecasting of El Nifio.