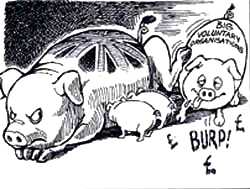 BRITAIN'S voluntary bodies should be stripped of their charitable status, says Voluntary Action, a report published by the home office of the UK. The report, which is a comprehensive review of 1,200 organisations and hundreds of local groups in 14 different communities covering one million people, recommends that tax concessions to voluntary organisations should be withdrawn and the Charity Commission abolished.

Those in the second category would return to the traditional role of voluntary bodies -- challenging the existing social order and concentrating on campaigning for change and piloting new ways of delivering services. These would recieve no state subsidies, only private donations from trusts, foundations and individuals.

The report is damning in its indictment of the big voluntary organisations and says they have lost their vibrancy, energy and strength as they have become more dependent on government funds. It says, "Some organisations are so cumbersome, moribund, outdated and riddled with error that nothing could touch them." Some were found to have an even more heirarchical structure than the civil service. Besides, senior staff are accused of being more interested in pay, status and "company" cars than in the people the bodies were set up to serve.

An in-depth study of 16 national bodies has revealed an increase in rules and procedures. The report found that an unhealthy tension existed where paid workers came into contact with volunteers, both at the top -- between professional staff and unpaid trustees -- and at the bottom -- between paid and voluntary workers.