Parliament, the highest legislative body in India, plays a significant role in formulating national policies. It is, therefore, pertinent to find the concern the parliamentarians (mps) and political parties show and the priorities they accord to issues during parliamentary discussions

A statistical analysis, based on the number of questions raised in Lok Sabha, between May 2004 and March 2008, shows that of the total 57,744 questions, only 4,241 (seven per cent) were on water-related issues 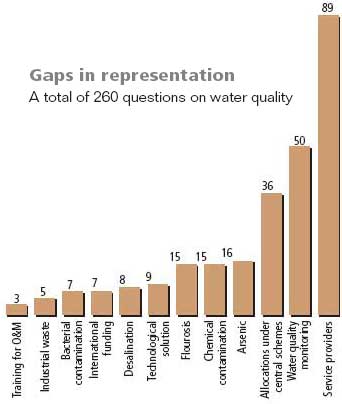 Most of these were on rivers, with primary focus on inter-basin water disputes and infectious diseases triggered by floods. Irrigation-related questions only came next to river issues.Water quality-related issues were given the last priority; mps raised only 260 questions on the subject

About 19 per cent of water quality-related questions were to the health and family welfare ministry, 33 per cent to the rural development ministry

Most of these questions were raised under the rule 377 that permits 12 mps to raise their issues in a day. Their names are selected on the basis of their party strength in Lok Sabha. The matter is discussed only after question hour and other issues in a day's agenda get over 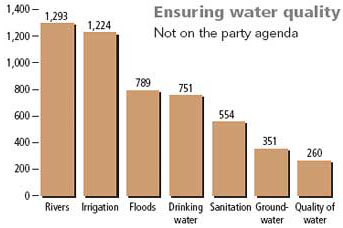 Most of the questions raised in Parliament were on the status and coverage of government schemes; very few talked of the quality and sustainability of water sources. Issues requiring coordinated efforts of two or more ministries were barely taken up for discussion and those related to governance failure did not find a mention at all