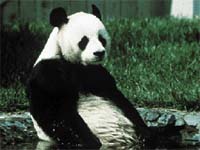 chinese scientists have achieved a major breakthrough by cloning the endangered giant panda by growing an embryo that contains genes from a dead panda. The proposal to clone pandas reflects the frustrations of zoologists who, after decades of research, remain puzzled by many aspects of panda reproductive physiology.

According to the scientists, this will go a long way in saving the endangered species. Scientists at the government-funded Chinese Academy of Sciences ( cas), the nation's top scientific body, developed the embryo by introducing cells from a dead female panda into the egg cells of a Japanese white rabbit, the official Chinese news agency Xinhua said.

The embryo was nurtured over 10 months and scientists are now trying to implant it in a host animal's uterus. Chen Dayuan, a scientist at the cas said, "We hope the host will not reject the embryo." If it works, they will possibly have created the world's first cloned panda," said the news agency.

Deoxyribonucleic acid analysis showed that the genetic characteristics of the embryo are the same as that of the panda's somatic cells, indicating that the cloned animal was without doubt a panda and not a rabbit, said Chen Dayuan, who also leads the cloning project. China had announced plans to try to clone a giant panda within three to five years. But Chen Dayuan said scientists now believe they will need less time.

The breakthrough has been hailed as a potentially "critical and exciting breakthrough" for saving the species. Giant pandas are native only to China, and about 1,000 survive in the wild. Loss of habitat and poaching have devastated the species, spurring efforts to develop artificial breeding techniques.

Scientists from the academy have spoken out in support of cloning animals, and have earlier cloned a cow from embryonic cells. But not all Chinese scientists support research into test-tube pandas. Pan Wenshi, a Beijing University professor who has spent more than 20 years studying the animals, argues that so little is known about their reproductive physiology that such research could cause the animals harm.

"The most urgent task for saving the giant panda is to expand their protected area and guarantee them a large natural habitat, besides preventing poaching and other threats to their survival," said Pan.