Domestic cat gives birth to a wild one, raises hopes of bringing back extinct species 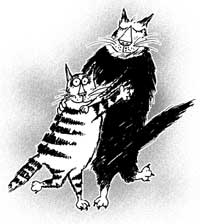 nature played into the hands of science recently when researchers at the us -based Audubon Institute Center for Research of Endangered Species transferred a frozen embryo of a rare African wildcat to the womb of a domestic cat. Later, the feline mother delivered successfully. "If extinction happens in the wild, the technology will be there to bring the species back," said Ron Foreman, chief executive officer of the institute.

However, some scientists were quick to point out that this technology is not a substitute for conservation. Rebecca Spindler, a researcher at the National Zoo's Conservation and Research Center at Front Royal, Virginia, usa , said, "I think we have to be careful how we use this. People tend to believe that we can bring species back. This is not necessarily true," she said, preferring to call the announcement an exciting breakthrough.

Now, the spotlight predictably has shifted to the domestic cat, Cayenne. According to reports, she is acting like any typical feline mother: protecting the kitten from strangers, nursing her and objecting loudly when the offspring is picked up by scientists. And, the baby wild cat, named Jazz, is equally at ease with her surrogate mother. "Cayenne thinks she has the ugliest baby in the world, but she takes care of it," said Betty Dresser, the research centre's director. Jazz was born on November 24, about 70 days after scientists had taken the sperm from a male African wildcat named Sid and the egg of a female named Sheena and implanted the embryo in the domestic cat.

Because of its size ranging in weight from 1.5 kg to 3.5 kg, the African wildcat was considered to be a good match for a domestic cat. Cayenne was chosen because she had proven herself capable of carrying kittens to term. She already had had nine litters. Dresser and C Earle Pope, other researchers at the centre, produced a kitten from in-vitro fertilisation. In this case, an embryo was kept in an incubator for five days and then frozen for a week.

Researches implanted eight embryos into Cayenne hoping that at least one would survive. The freezing process, not a necessary step in embryo transfers, was done to advance the idea that extinct species might be recreated years later by thawing frozen embryos when a suitable surrogate species is found. Scientists are not sure yet how long frozen embryos can be kept, but Dresser said they might be good for hundreds of thousands of years. "If this technology had been available during the age of the dinosaurs, we might have dinosaurs," she said.