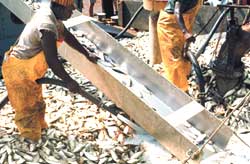 Britain's Royal Commission on Environmental Pollution has issued an alarm, saying the marine ecosystem around the world is on the verge of collapse. In its recent report Turning the Tide , it has called for declaring one-third of the world's oceans protected areas to stop fish slaughter.

The commission said the move would also be economically profitable. Closing 30 per cent of the world's oceans will cost nearly us $14.5 billion annually, while almost us $31.2 billion is spent annually on subsidising commercial fishing, it pointed out.

In a related development, the eu executive proposed the 2005 fishing quotas, which will be debated by eu member states soon. Scientists had recently demanded a total ban on cod fishing in some European waters. "What we propose today is a balance between what is biologically necessary and economically reasonable," said eu fisheries commissioner Joe Borg after releasing the new quotas. The quotas ban cod fishing in parts of North Sea, the Kattegat-Skagerrak waters between Denmark and Norway, the eastern English Channel, west of Scotland and the Irish Sea. It also continues with the restrictions on fishing haddock and whiting, mostly by-products of cod fishing, in some of these waters. But it proposes relaxing fishing restrictions on southern hake, sole and North Sea plaice, because their stocks have recovered in the recent past.