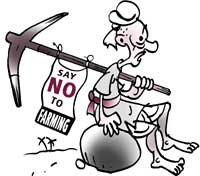 A survey of about 51, 770 agriculturist families has come out with a startling finding: about 40 per cent respondents said they would quit farming, given a choice. About 27 per cent said they did not like farming because it was not profitable, while eight per cent felt it was a "risky proposition." The New Delhi-based National Sample Survey organisation conducted the survey at the behest of the Union ministry of agriculture.

The survey, conducted between January and December 2003 for the agriculture year 2002-2003, covered farm households spread across 6,638 villages. The survey report, Some aspects of farming said 57 per cent of the farmers did not know their crops could be insured. Only four per cent of the households had ever insured their crops. About 18 per cent knew about biofertilisers. About 29 per cent understood what minimum support price meant.

And, only eight per cent of the households had heard of the World Trade Organisation.