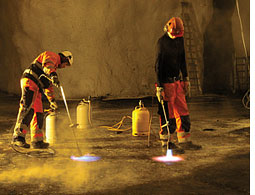 The first consignment of seeds bound for the 'doomsday vault' on Svalbard has arrived in Norway.

Twenty-one boxes containing 7,000 seed samples from 36 African nations were sent by the Nigeria-based International Institute of Tropical Agriculture (iita). The seeds will now be sent to the remote Arctic island to be stored in the Svalbard Global Seed Vault, which will be functional from February 26. The shipment consists of indigenous species such as wild cowpea, maize, soybean and bambara groundnut. These crops are of great importance to the region's food security as they are often adapted to harsh environments and are diverse in terms of their genetic, agroclimatic and economic niches, say iita officials.