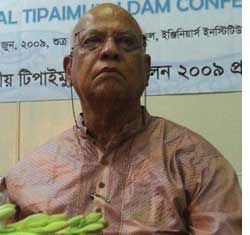 sunamgonj in Bangladesh, a few kilometres from the border with India, looks stirred up. On June 21, the town citizenry gathered at the public library to listen to five speakers from India's northeastern state Manipur and a social activist from Dhaka. The meeting continued till well past 11 pm. The speakers urged the people to stand up against an impending disaster a dam being built on the Barak river more than 100 km upstream in Manipur. After entering Bangladesh the river travels downstream as the Kushiara and the Surma.

The Surma flows close to Sunamgonj. The speakers reminded people that the dam was in a highly earthquake-prone area, and if an earthquake struck nothing would be left of the town.

The 162.8-metre-high dam at Tipaimukh village of Churachandpur district will displace about 40,000 people, mostly indigenous Zeliangrongs and Hmars in Manipur.India began preparation for construction of the dam in 2003, but halted it after resistance from within and outside the country. Late last year the environment ministry cleared the multipurpose dam supposed to generate 1,500 MW. This triggered protests in Sunamgonj in the past couple of months. On June 5, over 500 people marched on the streets, beating drums and shouting anti-India slogans, said A K M Muhim, journalist with the Bengali newspaper Amar Desh.

Half of Bangladesh's population--75-80 million people--is dependent on the Surma-Kushiara-Meghna river system, according to Muhammad Abdul Ghani, associate professor of sociology at Shah Jalal University of Science and Technology in Sylhet. Two-thirds of the Barak flow in Bangladesh. Once the river enters Bangladesh it forms a network of tributaries and distributaries.

As the Surma and the Kushiara flood in the wet season beginning May, they fill small depressions along their banks called hoars (wetlands) -- there are 42 of them. In the wet season the hoars team with fish. When the water recedes they are ready for farming, said M Maniruzzaman Miah, former vice-chancellor of Dhaka University. Diverting water from the Barak will leave about half of Bangladesh dry during winters, while during summers opening the dam's spillway gates in case of excess rainfall upstream can cause flash floods, warned Muhammad Hilaludin, general secretary of Angikar Bangladesh Foundation. 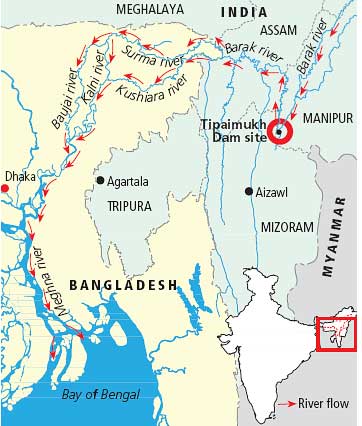 This worries Mujahaidel Islam Monju, who fishes and farms in hoars near Sunamgonj. He produces one crop of rice a year during the dry season, November to March. During the monsoon he fishes. "The floods bring new fish, and I make about 150,000 taka (Rs 1 lakh) by selling fish," he said. He makes about 10,000 taka (Rs 7,000) per acre by cultivating rice.

In capital Dhaka too demonstrations have become regular. On June 19, politicians, academicians, journalists and activists attended a National Conference on Tipaimukh. Bangladesh finance minister Abul Mal Abdul Muhit was present. National Committee Against Tipaimukh was launched. Until the meeting the Bangladesh government had maintained the dam would have no ill bearing on the country.

After California, the northeast region of India is the most earthquake-prone zone, warned Ali Akbar Mollick, a seismologist in Dhaka. The government is yet to study the impact of the dam, other studies are not made public. A 2005 study on the downstream effects of the dam by the Institute of Water Modelling, Dhaka, claims the reservoir will not only destroy the riverine system but also change the topography of the region (see box). The study, titled Hydrological Impact Study of the Tipaimukh Dam of India on Bangladesh, was not released because it was not based on official documents given by India. Delhi handed over the data related to the dam to Bangladesh only a month ago.